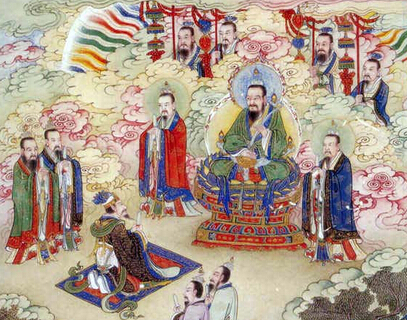 Tai-Ping Daoism was an important early Taoism school created by Zhangjiao around 172 to 178 A.D. Tai-Ping Daoism took “Tai-Ping Jing” as its main classics. “Tai-Ping” means peace, “Tai-Ping Jing” means the “Classic of Peace”. When Tai-Ping Taoism was established during Eastern Han dynasty, the government was extremely corrupted, the society was in turmoil, and the people were in desperate need of peaceful and prosperous life. By using the word of peace in its name, Tai-Ping Taoism had successfully attracted a very large number of followers, especially among the poor and needy.

Zhangjiao had divided his organization into 36 branches, which controlled 36 areas through out the nation. Zhangjiao named himself the “Da Xian Liang Shi’ or “The Great Wisdom Master”, and named the leaders of each branch the “Qu Shuai” or “The Channel General”.

Rituals commonly performed in Tai-Ping Taoism were all related to curing sickness. During one of the rituals the “Great Wisdom Master” or his “Channel Generals” would use a 9-section stick, which symbolizing their status, together with incantation to bless bowls of water, and then give it to people for drinking. Another kind of ritual was asking followers to confess and repent on their knees.

In the year 184, after careful preparation, Zhangjiao started the famous “Yellow Turban Uprising” aimed at overthrowing the government. The uprising failed, and Tai-Ping Taoism was banned thereafter, and left over followers turned their activities underground.