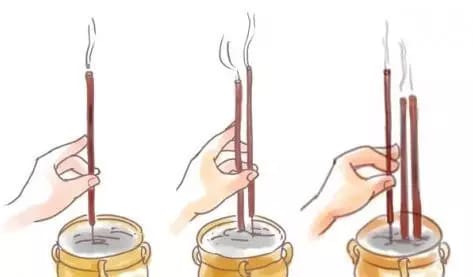 There are two kinds of “incense offering” rituals. One is performed by Dian-Zhu or the In-Charge of a Taoist Altar. In this kind of ritual, the Dian-Zhu will light three long incense sticks parallel to each other. The distant between the adjacent incenses should not be greater than an inch or they will not be accepted by the deities.

The second kind is performed by the In-Charge of a temple, the host of a ceremony or priests with high status. Three-inch long sandal wood sticks are used as incense. This kind of ritual is normally performed in solemn occasions.

Incense offering is normally accompanied by bowing and “Kowtow” (kneeling and lowering one’s head to the ground a number of times) done by priests as well as beneficiaries of the ritual. Bowing is commonly used by Taoists to greet another. “Kowtow” ritual is either performed in set of three or nine. A set is done like this, bow once followed by Koutow three times and ends with another bow. A set like this is also call one “Li”. At important occasions “Li” should be performed in groups of three.

When performing “KowTow” one must be on his knees, left hand holding the right hand, palm down touching the ground and then lower the head to touch the back of the hands three times.