In Taoism, people believe that there are three Corpse-Spirits inside each one of us. On the days of Geng-Shen 庚申,one day of the 60 days cicle, the Corpse-Spirits will ascend to heaven and report on our wrong doings during our sleep.

There are many methods to prevent them from doing so, such as medication, incantation, talisman and etc. But the most popular method is “守庚申 Shou Geng Shen”. “Shou” means “hold” in Chinese, here it means “stay awake”. But staying awake 24 hours on the days of Shou-Geng, the spirits will not have the chance to leave us and make bad reports.

The three Corpse-Spirits have many other popular names, and the processes to stop them from doing their jobs are also called “killing the three-corpse-spirits”.

The three Corpse-Spirits are deeply related to the Daoist Diet and fasting. Read more about it here. 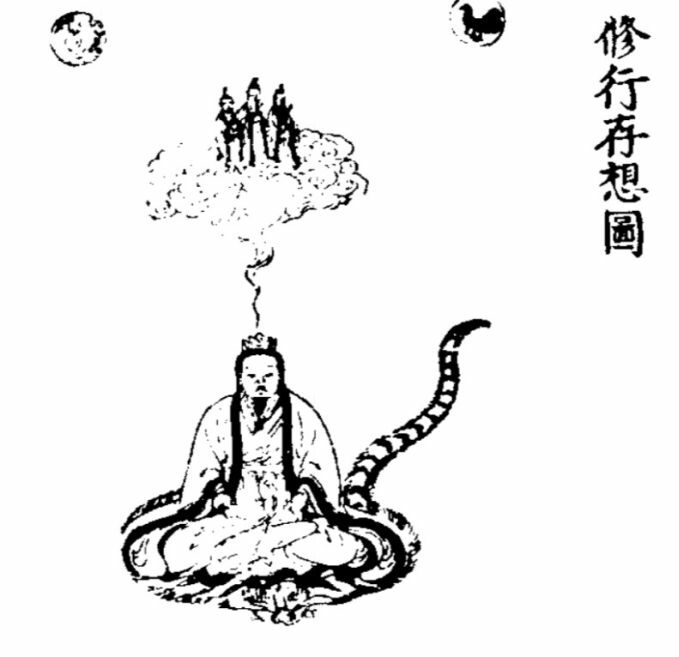 The three corpses ascend to heaven every 庚申 Gēng shēn day, approximately every two months on the 57th day of the 60 day cycle, to report the misdeeds of the host. To prevent the ascending and avoid punishment by heaven, Daoists use several methods on this day. There are methods to get rid of the three corpses, which is a long process where several medicines and chemicals are used.

The “太上除三尸九虫保生经 Tài shàng chú sān shī jiǔ chóng bǎoshēng jīng” shows several recipes to get rid of the three corpses, all include poisounous ingredients and the smallest mistake when making the medicine will lead to the death of the practitioner when taking the medicine. In the history of China there were many kings wishing to become immortal and died from trying these medicines.

Other methods to avoid the ascending of the three corpses to heaven are talisman, meditation and fasting practices. These methods are done on the Geng Shen Day and/or around these days.

Fasting includes the ingestion of different herbs and avoidance of several foods (listed below).

Laojun get rid of corpse and worm recipe:

Use Guanzhong to kill “Fu worms”, Baiquelu to kill “You worms”, Shu lacquer to kill white worms, Wuyi to kill meat worms, Leiwan to kill red worms, Silkworms to kill scorpionworms, Magnolia to kill lungworms, Langyazi to kill stomach worms, Stone silkworm kills dung beetles, nine herbs are made into water pills and light powder soup, five pills are taken daily, the effect will be seen in 30 days, and all diseases will be cured in 60 days.

Take ten pieces every ten days, to remove three corpses and nine worms, and to protect the essence of yang. Cinnabar ink is used for these talisman. Use Talisman together with the ingredients above to get best outcome.