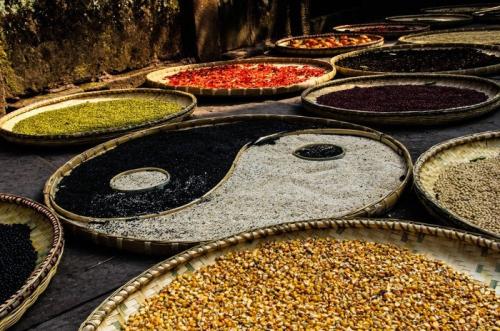 If one cultivates Dao,internal practice or spiritual cultivation, depending on the practice there are restrictions on the consumption of meat, fish and sharp and pungent smelling vegetables and herbs.
Spicy and pungent vegetables are also called the 5 severe or the 5 spicy flavors.

These arise from the abnormal qi of heaven and earth and are strong in taste.The Qi is unhealthy and its consumption can affect the organs.

1. Garlic: Affects the heart and excites the qi of fire. Excessive consumption affects the mind and one becomes disorganized.

1. Onions: affect the kidneys and deplete the qi of the water. Excessive consumption leads to mood swings, discomfort leads to panic.

1. Leeks: Affects the liver and overcomes the Qi of the wood. When the fire prevails in the liver, it is easy to get irritated and emotions are affected.

1. Spring onion: Affects the spleen and suppresses the earth’s qi. When the spleen and pancreas are irregular, feelings of anger and brooding pile up.

1. Coriander: Affects the lungs and hinders the qi of the metal. When the lungs are overworked and drained, one often falls into a pessimistic mental state.


The tastes of these foods are very strong and, after consuming them, can trigger cravings in people. Excessive consumption can even be unhealthy for the body. Consumption of meat and fish can lead you to lose your nature, it creates sins by killing, you fall back into the infinite cycle of being born and striving. A Dao practitioner understands the virtue of heaven and honors life, encourages compassion, does not kill, avoids feelings of anger and the consequences of sin. These are the reasons why you are not meat. The diet of a Daoist is light, no strict tastes. Purity and clarity, calmness of the mind and harmony of the Qi, being free from diseases, it all comes by itself.


Believing Daoists do not necessarily have to be completely vegetarian. Ordinary believers can consume meat that they bought in the market, but they are not allowed to kill the animal, as this prevents the association with the Dao. The Daoist diet also depends on the practitioner’s individual circumstances. If he / she lives worldly, it can often be difficult to only eat vegetarian food. When one is sick and one’s body is weak, one should consume fortifying foods. It is important not to be dogmatic about diet. One can consume the “3 clean meats”. This means 1. no thoughts about the butcher, 2. not slaughtering yourself, 3. not being there at the slaughter. These are the “3 clean meats”. The Daoist teaching advises a vegetarian diet, but it does not necessarily prescribe this in daily practice. Daily practice focuses primarily on cultivating and purifying body and mind, and in the course of cultivation one will also detach from meat and fish naturally.

The avoidance of grain shows the Daoist rejection of the usual
social practices. It is a return to a time of the dawn of the
Humanity when there was no grain. It’s a return too
to a more primitive and simple way of eating.
Daoist Bigu practitioners found a way to be agricultural
Base, the Chinese society, in the grain as a staple food
were necessary to end ancestral sacrifices and tax payments.
The “cutting off” of the grain which is the staple food for farmers
was also a rejection of their sedentary lifestyle and the peasant condition as such. This rejection should not be based solely on the misery of the peasants, but should be interpreted in a much deeper way. Agriculture has been the cause of a radical break in the way of life for almost all of prehistory since the Neolithic Age. Agriculture has also been the main cause of the imbalances in human civilization over the past ten thousand years. The systematic destruction of the natural environment, overpopulation, capitalization and other evils that lead to sedentarism.
Grain abstinence was a prerequisite for the practice of the Daoist Yangxing 养 性 “Nourishing the inner nature”.

The nurturing of the life principle consists in the suppression of the causes of death and the creation of the immortal body to replace the mortal body. The causes of death are primarily the qi of grain and the qi of bloody food. One replaces the usual food with the food of the breath qi. The air you breathe in is held for as long as possible without it flowing out and while it is held you take a big bite and with the idea that you swallow the qi like a big sip of water from the windpipe into the esophagus, so that it is enters the stomach like normal food. The body, like all things, consists of Qi, but it is made of rather coarse Qi, while the air is a light, fine and pure form of Qi. Usual food supplies the body with the qi of the five flavors through digestion. This is heavy polluted qi. On the other hand, the Qi food from the breath replaces the coarse matter from the body with light, pure Qi, and when the transformation is complete, the body is immortal.

Some versions of grain abstinence can lead to health problems. It is reported, This very heavy diet was not without painful moments. Without grain and meat, whoever practices it is malnourished, and the Taoist authors further report that there were numerous problems in the beginning and some of them experienced dizziness, weakness, drowsiness, difficulty moving, others developed diarrhea, constipation, etc. Nevertheless were they persistent, insisting that these symptoms go away after a few weeks and that the body will soon feel like it was before. Even better, more calm and lightness. They also advised starting the practice gradually and recommending a range of medications for the transition and adjustment period that lasts thirty to forty days. The recipes for drugs that help in the practice of grain abstinence are numerous: ginseng, cinnamon, coconut, sesame, digitalis, licorice, and all the traditional Chinese tonics play a crucial role.

The three corpses or three worms

Avoiding grain was the primary medical treatment for getting rid of the San Shi 三尸 “Three Corpses” or San Chong 三 虫 “Three Worms”. Evil spirits that live in human bodies and hasten death. Demonic supernatural beings who strive to decay the body in order to feed on it. If one is to have a long life, the three worms must be starved, and the only way to do this is to avoid grains.

Traditional Chinese medicine combines the mythological three corpses / worms with the Jiu Chong 九 虫 “nine worms”, which correspond to parasites such as roundworms or tapeworms, with symptoms that cause a variety of weaknesses in the host’s body.
The three corpses enter the human body at birth and are located in the upper, middle and lower Dantian “cinnabar fields”, in the brain, heart and stomach. After their host dies, they become ghosts and roam free to steal offerings. These corpses try to harm both their host and its fate. First, they weaken the bodily energy centers Dantian. Second, the three corpses are records of their host’s misdeeds, which go up into heaven every two months on the 57th day of the cycle, the Gengshen 庚申. Reports from Siming 司命 “Director of Fates” say: “Misdeeds shorten lifespan”. In the 4th century, Huang Ting Jing 黄庭 经 “Yellow Judgment Scripture” says: “Do not sleep day or night, and you will become immortal.”

Bigu, the abstinence from grain and grain products, withers the three corpses and is the basis for many Daoist dietary therapies, which can also exclude wine, meat, onions and garlic. The Jinjian Yuzi jing 金 简 玉 字 经 “Classics of Jade Gold Characters”
states: “Those who eat neither grain, wine, meat, nor plants of the five strong flavors, have to bathe, wash their clothes and smoke”.
Practicing bigu alone cannot eradicate the three corpses, but it does get to a point where they can be killed with alchemical drugs, especially cinnabar.
It is further described:

• Qīng Gǔ 青 古 “Old Blue” lives in Upper Dantian, “It is he who makes people blind, or deaf or bald, who makes teeth fall out and bad breath. “

• Xue shī 血 尸 “Bloody Corpus” lives in the Lower Dantian “It is through him that the intestines twist painfully, that the bones dry out, that the skin tears, that the thighs develop rheumatism”

• The upper corpse, Peng jū 彭 琚, lives in the head. Symptoms include a feeling of heaviness in the head, blurred vision, numbness, and excessive flow of tears and phlegm.

• The middle corpse, Peng Zan 彭 瓒, lives in the heart and stomach. It attacks the heart and makes its host long for sensual pleasures.

• The lower corpse, Peng jiǎo 彭 矫, lives in the stomach and legs. It causes the ocean of pneuma … to drain and makes its host lust for women / men.

Woodcut illustrations of this text show the upper corpse as a scientific man, the middle as a quadruped, and the lower corpse as a monster with horse legs and a horned human head

Today it has been scientifically proven that certain parasites in the human body feed on the components of grain and sugar. These parasites are even able to change the character of the host and its habits in such a way that it follows the preferences of the parasite. Parasites such as flukes or Toxoplasma gondii, which is actually a parasite that resides in cats and small mammals, which creates a high willingness to take risks in humans and mice that are infected with this parasite, almost voluntarily throw themselves to the cat to eat, because the parasite makes the mouse believe that there is no danger.