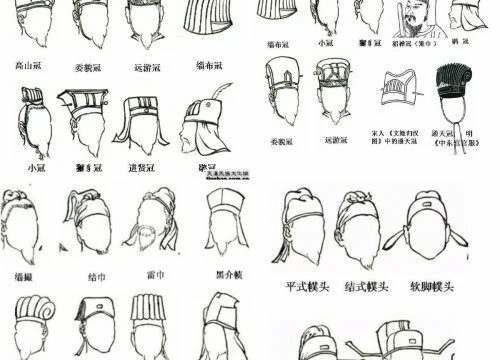 A deep insight into daoist headwear and hair styles, introduction of the items and accessories in detail and historical background informations.

The Fǎ jì is usually placed at a point on the center of the head called Bǎi huì 百會 which means “Hundred Meetings” a major spot at the meridian system and an energetic door for spiritual energies, so the hair serves as an energetic antenna for a better connection with those energies.

The most common daoist Buns are the Tai Chi Bun – 太极髻 and the Hun Yuan Bun 混元髻. Both are made by warpping two sections of hair around the traditional daoist hairpin, called Fā Zān – 髮簪 and then tied together with a ribbon.In the old days, the topknot was reserved for those who had been accepted as disciples in a Daoist lineage. When a new aspirant first entered the temple, he had to complete a probation period of about three-years in which he would stop cutting his hair. After the three years, he could be accepted as a disciple and a discipleship ritual would be held in which the master puts up his hair in a topknot for the first time.

Besides the Topknots or Fǎ jì – 发髻, the daoist headware can be divided into two categories, in Dao Jin’s – 道 巾 (Hats) and Dao Guan’s – 道 冠 (Crowns).The Crowns will be the another topic in a further part of this series.Daoist hats are referred to as Dao Jin – 道 巾, although the character Jin – 巾 has the actually meaning of scarf or piece of cloth which refers to the early historical origin of the daoist headware, from pre Qin Dynasty – 秦朝 (221 -206 BC).The headware of the pre Qin era, consisted mainly of simple shaped fabric caps, kerchiefs and turban like head Scarves. Some of these styles lasted through the ages and dynasties and the simplicity of there character, reflects in the daoist headware till today.

Even at the time when at noble courts and among officials ever more ornate and opulent hats and bonnets came into fashion, these simple caps and cloth hats continued to enjoy great popularity, especially in intellectual circles such as artists, literati and philosophers of ancient China and daoists of course, because they preferred an simple and lighter styl of headware.The specific daoist form of clothing and headware started to develop at the begin of the Qing Dynasty – 清朝 (1644 – 1911 AC) around 1645.

After the Qing from Manchuria had seized power in China, they began to suppress the Han Chinese population and tried to replace the indigenous Han Chinese culture with own cultural influences, and even the traditional clothing and headware of the Han were banned by the Qing.While the Confucian and Buddhist parts of the courtly establishment tried to adapt to the new rules, many Daoists categorically rejected this and retained to the cultural traditions and costumes of the Han chines .This maintaining on Han chines culture, traditions and customs, is one the reason way so many aspects in daoism are linkt to the pre Qing era, such as clothing and headware, music, martial arts, tea ceremony, iconography, calligraphy etc…In literature, a special daoist headware is first mentioned by Min Yide – 闵 一得, courtesy name Min Xiaogen – 閔小艮 (AD 1758-1836) in the book – Clear Regulations and Mysteries – 清規玄妙說 , referred to as the Nine Scarves – 九巾 – Jiu Jin.

Nine Daoist Head Scarves – 道教九巾 or better the Nine popular Daoist Head Scarves, because like a saying which is attributed to Min Xiaogen (who mentioned the nine daoist scarves for the first time) already says, Dao has nine Scarves, but the names of the nine Scarves are not fixed – 道有九巾，但是九巾的名目并不固定。- “Dào yǒu jiǔ jīn”, dànshì jiǔ jīn de míngmù bìng bù gùdìng.In fact, there are more than nine types of daoist scarves. It is just that nine types are often be used to represent them, which is probably also reference to the high symbolic value of the number nine (three times three) in Daoism.

See also – Daogu Xuan Chu – 道姑 翾楚 – Chapter 208 – “九”为纯阳之数，代表道教 – “Jiǔ”wèi chún yáng zhī shù, dàibiǎo dàojiào – “Nine” is the number of pure yang, representing Daoism.The next thing we should pay attention to is the color and the material, of the daoist scarves. The most daoist head scarves are made of black silk or satin which has also a deeper symbolic background, because in daoism black corresponds to water in the five element system and water represents the supreme good in Daoism.

In the book Taoist Rituals – 道教儀范 – written by Daoist Master Min Zhiting – 道長 高道閔智亭 (05.05.1924 – 03.01.2004), who was director of the contemporary Gao Dao, the nine most popular scarves from the late Qing Dynasty to modern times are:

There is approximately about 100 years between the two lists and it shows the changes over the time in the daoist Headware. Beside these two lists, many others can be found in literature and the internet but if you have a closer look it often reveals, that only other names for the same kind Scarfs are used. Which often pendents on time and place of their compilation.

The Hun Yuan Jin has a round hard brim and is made of black silk or satin with a hole in the middle, because daoists who wear the Hun Yuan Jin usually also wear a Fǎ jì – 发髻 (daoist Top Knot or Bun) – , and the hole is to reveal the bun, which runs through a hairpin, the upper back is slightly raised to show detachment.It is named after Hunyuan – 混元 which is an ancient, central concept in Daoism.

Hun – 混 means undifferentiated unity, the state of mind and being that occurs, when one does not divide the world into concepts. In other words, Hun is the equivalent to inner silence. Yuan – 元 means origin or original. Hun with yuan becomes the concept of Hunyuan, the Primordial State of Being.The Hunyuan towel originated in the Qing Dynasty, but Daoist Master Min Zhiting – 高道閔智亭 (05.05.1924 – 03.01.2004) referred in his book Taoist Rituals – 道教儀范 – that the Hunyuan scarf was derived from a headscarf worn by Han Dynasty alchemists.

The Hun Yuan Jin is also known as “Crown Scarf” – 冠巾 – Guan Jin, used to be one of the most formal Head Scarf in Daoism, in previous times the Scarf was usually paired with a Guan – 道冠 – daoist Crown and only be worn when ceremonial rituals were performed, it was also stipulated that the Hun Yuan Jin could only be worn by Daoists who already had received their crown ceremony.

But in our days this strict restrictions have been gradually overcome and the Hun Yuan Jin became one of the most popular Head Scarves among modern day daoists and is widely worn by scholars and clerics. The Zhengyi Pai – 正一派 Daoists who mostly don’t follow the tradition of hair accumulation and wear also short hairstyles, commonly sew the Hunyuan Jin and the crown together so they can easily be worn. Alternately to the Hunyuan Jin a hexagonal cap on which also a crown can be attached, the Liùjiǎo Mào – 六角帽 (which will be topic in another issue) is also often worn by Daoists of the Zhengyi School. Another variation of the Hunyuan Jin is the 网混元巾 – Wǎng hùn yuán jīn – braided Hunyuan Jin.

The Zhuāngzi Jīn has a trapezoidal shape, with a rectangular base – round when worn, front and back are pointed towards each other and end in a straight top, in the side view, the scarf has a triangular look.

He was first recognized as daoist head scarf in the book – Clear Regulations and Mysteries – 清規玄妙說, by Min Xiaogen – 閔小艮 (AD 1758-1836) as Chong hé Jin – 沖和巾 – but his origins reaches probably back to pre Qin Dynasty – 秦朝 (221 -206 BC).The Zhuangzi Jin is mostly worn from daoists who don´t accumulate hair or elder ones who have already thinning hair due to their age.It’s also often worn at autumn and winter time when people prefer wearing a closed head wear.There are also versions, made of heavy and light mesh material available.