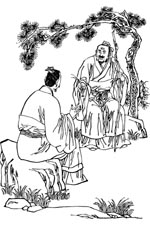 Founded in 12th century during the early Jin Dynasty by Wang Chong Yang. Later in Yuan Dynasty (12 – 13th century ) it became one of the two major sects of Daoism ever since. Wang founded Quan-Zhen Daoism during his teaching tour in 1167.

Wang believed that one needs to realize the self and uncover one’s true nature. He insisted that all three major religions in China (Daoism, Buddhism and Confucianism) were intrinsically the same and should not be separated, since they all believe in honesty, true self, unselfishness, and abstinence. In Wang’s organizations, the followers worship the founders of all three religions, Laozi for Daoism, Confucius for Confucianism, and Buddha for Buddhism. Wang’s Quanzhen Daoism was also called the Northern Lineage of Quan Zhen Daoism since it was mostly active in northern China. Northern Lineage made great success and reached its peak during the time of Wang’s student Qiu Chu Ji. Qiu Chu Ji and Quan-Zhen Daoism under his leadership was greatly appreciated by the ruler Genghis Khan. He granted Qiu Chu Ji the title of “immortal” and put Qiu in charge Daoism religion for the whole nation. Due to the supportive interference by the government, Quan-Zhen Daoism spread rapidly through out the nation and became very popular.

Many other Daoist sects, under such circumstance, merged into Quan-Zhen Daoism, include the very influential sect called “Southern Lineage”. Both the Northern Lineage and Southern Lineage emphasize on self cultivation of the Dao instead of performing incantation and talisman. But there are significant differences between the two lineages.