In Taoism, the 法印 “Seal” represents the authority of the gods of the three realms, so it has a wide range of uses.

The basic purpose of the 法印 seal is to use the seal according to its purpose, such as commanding the gods, exorcising ghosts and warding off evil spirits, expelling wind and thunder, alchemy and self-cultivation, and making talismans. From the records of many Taoist books, it can be seen that there are about ten functions of the seal, mainly including: 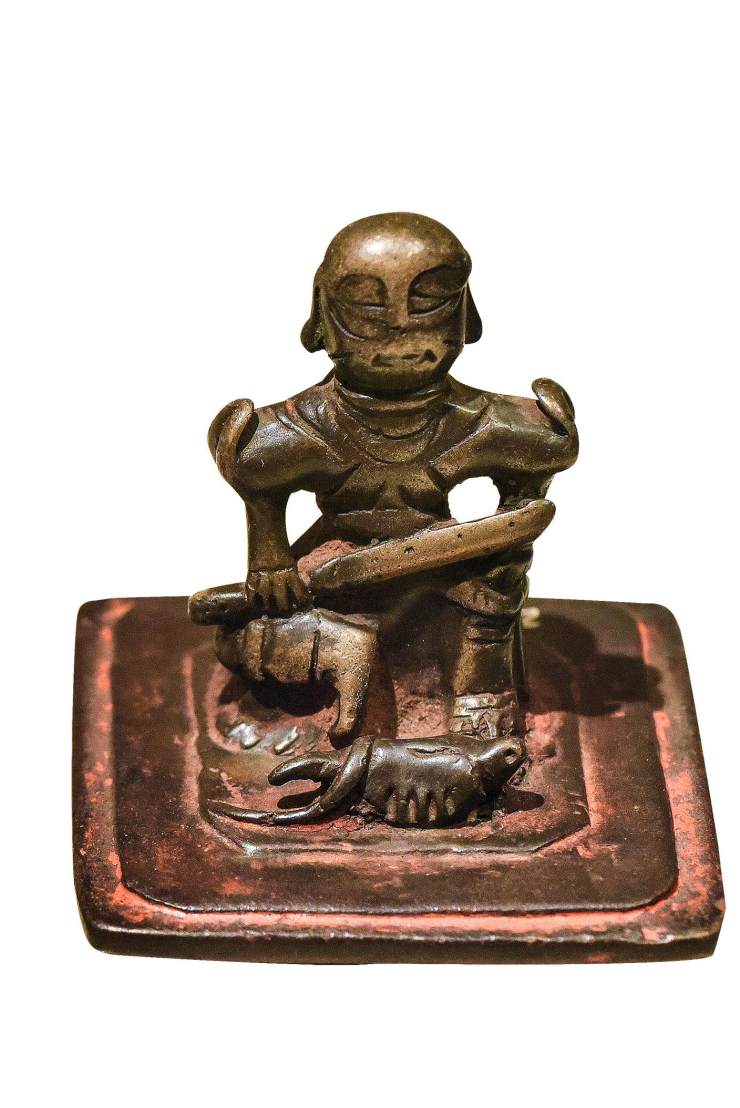 Refering to the celestial phenomena, adjust the climate, change day to night, summer snow and winter thunder, and lead the department of wind, rain and thunder.

《太上通玄灵印经》 says:”If the six Ding jade girls(六丁玉女), as well as all the ghosts and gods, are painted with cinnabar, all the ghosts and gods will come and serve with people, moving mountains and exhausting seas, thunder and lightning, heaven and earth. Darkness, the fall of the sun and the moon, and the rise of clouds and rain, this seal can be used by people.”

“If you want to make the six Ding move mountains and exhaust the sea, you can use cinnabar to seal them. If you make a horizontal seal to the west, the mountain will be moved into the flat river. If the vertical seal will turn to the east, you will follow this mountain. Hold the seal in the left hand, and face eastward, the sound of thunder, shaking the heaven and earth. If you want the sun and the moon to be dark, and the clouds will cause rain, the seal will call the Eight Gods to come, and the clouds will cause rain.”

In this regard, the 《思印气诀法》 says: “To seal mountains, rivers, seas, and lakes, first knock the teeth twelve times, and then make the seal with the left hand. Focus the Qi and  bless the twenty-eight stars andthe three officials, bring the Qi into the sealstamp, so the qi gathers the essence and transforms the qi, the mountain collapses, the evil are eliminated, the ghosts and the rebels die.The thieves, the swordsmen, the poisonous plague, and the mountain thieves will all be destroyed.”

《太上通玄灵印经》also says: “If you transform mountains, forests, rivers and seas, hold the seal in your hand, and shake your body three times, the person will turn into a wooden hill soldier. If you want to stop, the vertical seal will be directed to the sky, and the person will be returned. If you want to transform a river, apply ink and seal it, wear it on your head, shake your hands three times, and it will become a big river, with water as wide as a hundred miles. 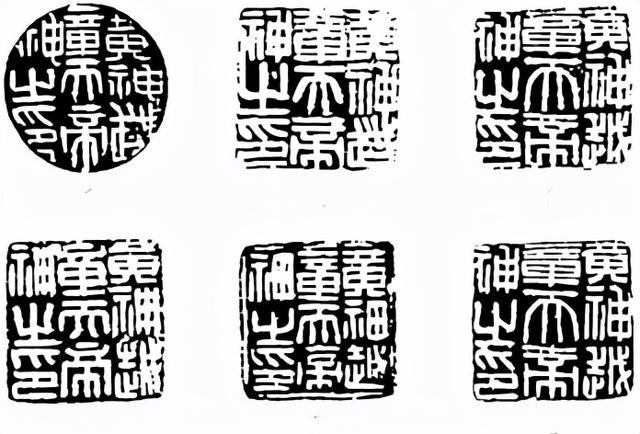 Conquer poisonous insects, ride dragons and tigers, ride cranes into the sky, ride in the air, travel the five mountains, shrink the land for thousands of miles, change invisibly, subdue tigers and dragons, and show all kinds of supernatural powers.

《太上通玄灵印经》 says: If you want to prolong your life and longevity, ask for immortals to come, “Use the red kudzu flower to smear it three or seven times, and the Eight gods and Six Ding will come, help the generals to go to the sky, and be able to take advantage of the emptiness to travel through the five mountains. , hidden thousands of times, the gods, men and women of the Five Sacred Mountains, all come to greet the son. The son first shrinks the earth’s veins, and then travels all over the world, and then seeks the immortals to obtain.”

“When Ziruo sees it, he will mark it across the immortals, and set up ten thousand lions. When the immortals see him, they will all sigh. He is designated as an immortal, and his name is in the palace of Zifang, Jinque, Dashan. 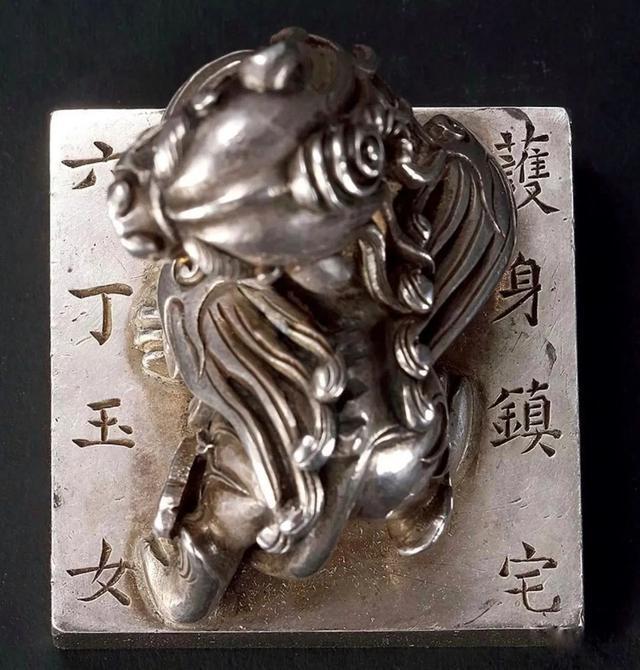 Such as turning plants and trees into people, flowers and fruits self-producing, mastering the inversion of the five elements, the mystery of the nine palaces changing.

《太上通玄灵印经》says: “It is the scripture of Lingbao Tongling Lingyan that Taishang Jinkou said, and if you follow the method, you will be transformed into ten thousand kinds on the third day of the third month. Fruit trees, rivers, seas, soil, rocks, wind and rain, and birds and beasts are all transformed into them, and they can do anything.”

“If the invisible change is made, the seal will face and become a husband; to the heart, it will become a woman; to the foot, it will become soil; If you want to transform plants and trees, harvest hundreds of flowers on the fifth day of the fifth month, dry them on the 20th day, paint them as seals, and seal the ground, and people will transform hundreds of plants.”

“Put the seal on the left and right, and there will be thousands of people. If you want to stop, the seal will stand towards me. If you want all animals, lions, tigers, wolves, dragons, poisonous snakes, horizontally seal them to the ground, you will become a thousand-headed poisonous snake, ten feet long.”

《思印气诀法》 says: If you encounter a wicked person and want to inflict harm, “Introduce the left qi to the right, use the seal , take three steps, close the qi in three links, close the eyes and then curse the heart. Say: The way of heaven leads me, the sun and the moon benefit me, the stars protect me, the four seasons support me, the five elements make me, counsel and curse, wicked people turn against officials, bury their corpses under the sky.”

《思印气诀法》 says: “If the epidemic Qi is prevalent, put the real cinnabar onto the teeth and seal it on the door of the person. If the temple is sealed, enter the temple, hold the breath, and praise the temple gods in all directions , shush on the stamped teeth, stomp five times.” 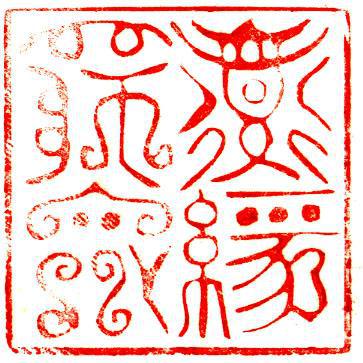 《思印气诀法》says: “The method of sending ghosts: If there is a mountain, rock and a big tree, cut it to make a hole, make a footprint, use the stove to harmonize it, put it in the middle of the hole, hold your breath for twelve breaths, step the seal and speak the incantations: 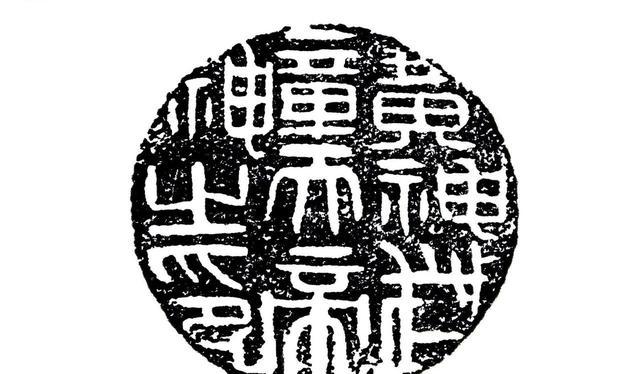 Live in a protected house, help the distressed, relieve the orphan and the poor, pray for the country, bless the world, and have the magical power of protecting the people, protecting the family and defending the country.

《思印气诀法》 says: “If the tomb of the deceased is uneasy, you can mark it in the center  with real cinnabar, use white paint to make a square one foot, seal it. If it is stable, all the gods and ghost are happy, and they will be go off again.”

Control the fate of the three worlds, to save all people in danger, to make people wise, to understand the truth, to turn the ordinary into a saint, to use nature, to obtain great supernatural powers, and to reach the realm of perfection. 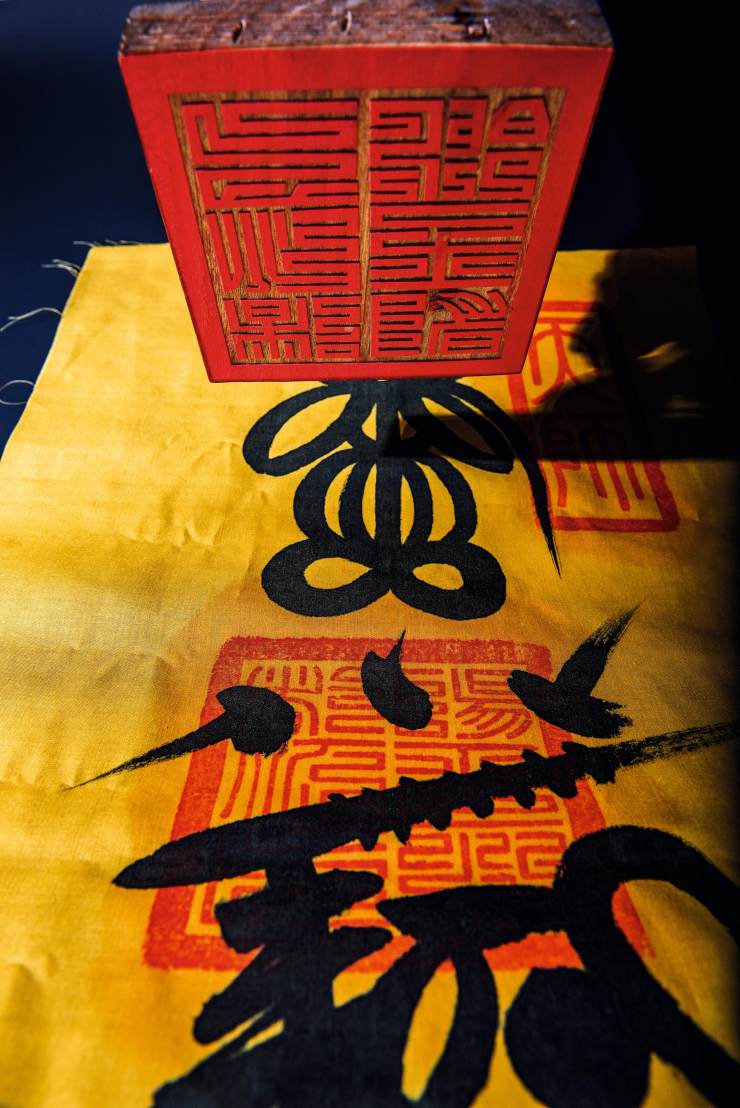 Refine the souls of the dead, and open the world.

For example, the seal of 青玄左府太一救苦回骸起死之印 is used to save the souls of the dead. The so-called “relief from suffering” refers to the talismans used in the 灵宝斋法 to save the dead and wronged ghosts.

《灵宝玉鉴》 says: “The talisman is used for its wonderfulness. The wonderful light of the combination of spiritual treasures, with the spirit of understanding, between the gold, jade, cinnabar and ink, and slightly revealing the serenity, holding the talisman, monitoring the truth and saving life, and also embodying the wonder of the natural deification of mysteries.”