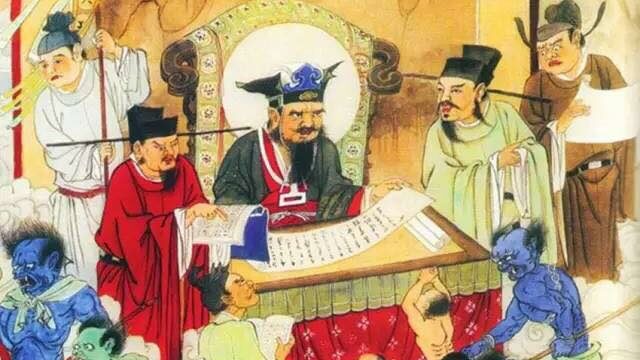 The paintings of torture of the eighteen layers of hell. Do good deeds in the world and stay away from all evils. 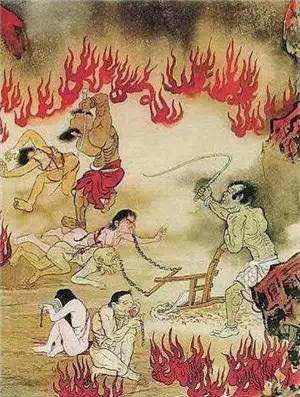 The first layer is tongue-pulling hell: all people in the world sow discord, slander and harm others, slick their tongues, argue eloquently, and lie and deceive others.

After death, he was thrown into the tongue-pulling hell. The Small Ghost openes the mouth of the person who came, clamped the tongue with iron pliers, and pulled it out all the time, not all at once, but elongated, slowly pulled… and then entered the scissors hell, the iron tree hell. 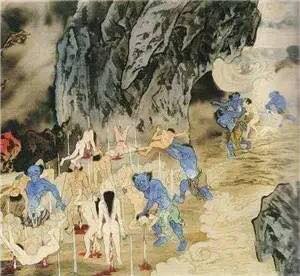 The second layer is the scissors hell: In the world, if a woman’s husband unfortunately dies prematurely, she will be a widow. If you instigate her to remarry or match her, then you will be cast into scissors hell after death, and you will be cut off all fingers. 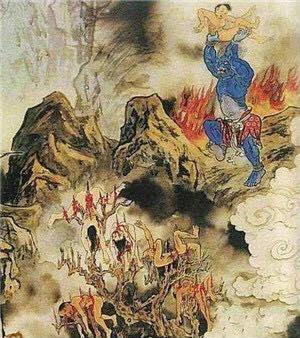 There are sharp knives on the tree, and they are picked under the skin of the back and hung on the iron tree. 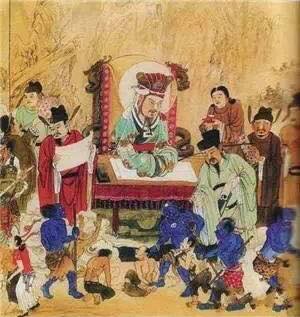 The fourth layer is the Mirror Hell: If you commit a crime in the Yang World, if you don’t tell the truth, or if you could escape, go up and down, and cross the sea, even if you escape punishment, you will die in your life, right?

Go to the underworld to report, enter the evil mirror hell, and show the crime according to this mirror. Then go to different hells to suffer. 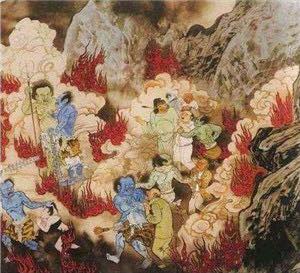 The fifth layer is the Steamer Hell: There are people whose parents are short-sighted on weekdays, who spread the truth, framed, and slandered others. She’s the so-called long-tongued woman.

After such a person dies, they are thrown into the hell of a steamer and put into a steamer to be steamed. Not only that, after steaming, the cold wind blows, reshapes the human body, and brings it into the tongue-pulling hell. 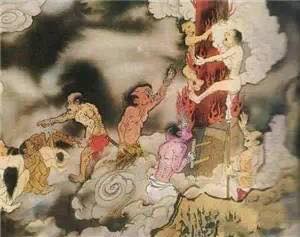 The sixth layer is the Bronze Pillar Hell: malicious arson or to destroy evidence, revenge, set fire to death, and enter the Bronze Pillar Hell after death. The little ghosts stripped you of your clothes and let you hug a copper cylinder with a diameter of one meter and a height of two meters. 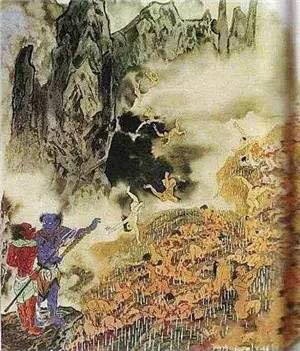 The seventh layer is the Mountain of Knife Hell: It doesn’t matter if you don’t believe in the blasphemers; if you kill animals, don’t mention killing people, just say you killed cows, horses, cats, dogs…because they are also life, maybe their previous life was also human or maybe yours…

Because the yin division is different from the yang realm, there is no distinction between high and low, cattle, horses, cats, dogs and people are collectively referred to as living beings. 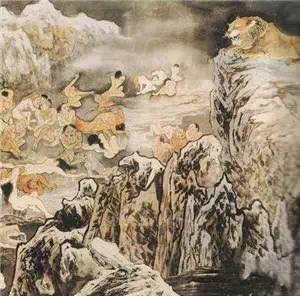 The eighth layer is the Iceberg Hell: Any wicked woman who murders her husband, commits adultery, and maliciously aborts will enter the Iceberg Hell after her death. Make her strip naked and go up to the iceberg naked.

In addition, there are gambling habits, unfilial parents, unkind and unrighteous people, making them go naked on the iceberg. 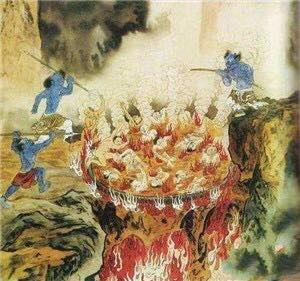 The ninth layer is the oil pan hell: prostitution and whoring, robbery by thieves, bullying, abducting women and children, falsely accusing and slandering others, conspiring to occupy other people’s property, wives, and entering the oil pan hell after death, stripping clothes and throwing in hot oil Frying in the pan.

According to the seriousness of the circumstances, it is sentenced to be fried many times… Sometimes people with deep sins have just come out of the iceberg hell, and they are escorted by the small ghosts to the oil pan hell to warm up. 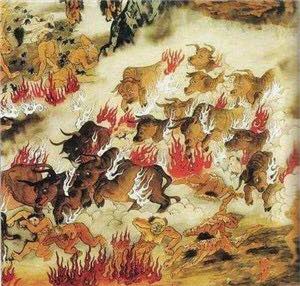 The tenth layer is the Bull Pit Hell: This is the first floor of hell for retribution for animals. Whoever  alive killed beasts at will and builds your happiness on their pain, will go into the bull pit hell after death.

Throwing into the pit, several wild bulls attacked, with their horns topping and their hooves stepping on… 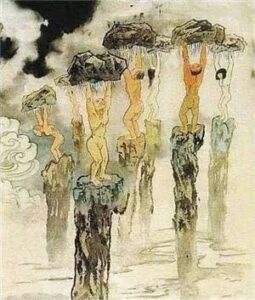 The eleventh layer is the Stones pressing hell: If a living person gives birth to a baby, no matter what the reason is, such as the baby is born stupid, disabled, or because of the preference for sons over daughters, the baby is drowned and abandoned.

Such a person is thrown into a hell of stone after death. It is a large square stone pool, on which a boulder of the same size is hung with a rope, people are put into the pool, and the rope is cut with an axe… 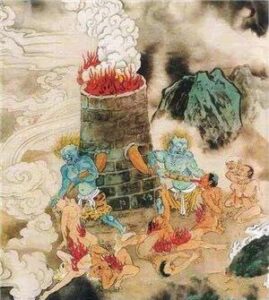 The twelfth layer is the Mortar Hell: This prison is quite strange. When a human being is alive, if you waste food and spoil the grains, for example, you throw away the leftover feast at will, or throw away the food you don’t like after taking two bites. 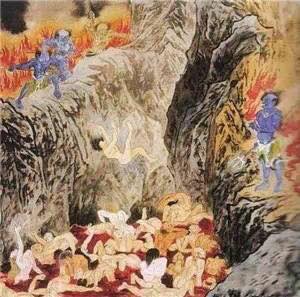 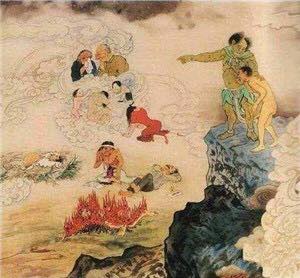 The fourteenth layer is the hell of death: you must know that it is not easy to come to this world as a human body. It is the opportunity given to you by the Lord of Hell.

If you don’t cherish it, commit suicide, such as cutting your veins to death, taking poison to death, hanging yourself, etc., to provoke the Lord of Hell, and you will be thrown into the prison of vain death after death. Don’t even think about being human anymore. 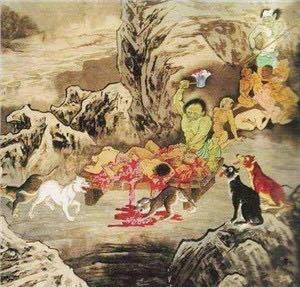 The fifteenth layer is the Hell of Punishment: It’s rare now, but it’s a big crime. That is, those who dig up graves will be cast into the hell of punishment and sentenced to death after death. 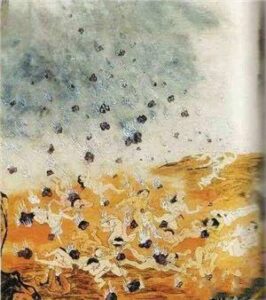 The sixteenth layer is the Volcanic Hell: This layer is more extensive. People who harm public and private individuals, give bribes, steal chickens and dogs, rob money, and set fires will enter the volcano hell after death.

Was driven into a volcano and burned alive without dying. In addition, there are monks and Taoists who violate the precepts. was also driven into the volcano. 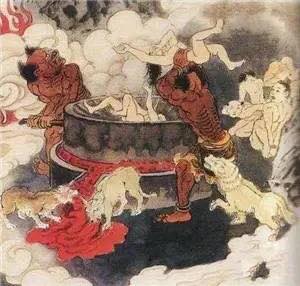 Grind into meat sauce. After reshaping the body and then grinding. In addition, there are monks who eat meat, and the same is for Taoist priests. 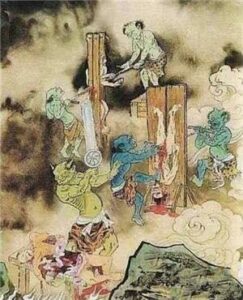 The eighteenth layer is the Saw hell: cut corners, deceive people, kidnap women and children, buy and sell humans, unfair people, will be sent to Saw Hell after death.

Take off the person’s clothes, and bind them to four wooden stakes in the shape of a “大” shape, starting from the crotch to the head, and sawing them to death.