“Yù qīng wú shàng líng bǎo zìrán běidǒu běn zhēn jīng 玉清无上灵宝自然北斗本真经” records that “Dòu mǔ 斗姆” was originally the beloved concubine of “Zhōu yù wáng 周御王” during the “Lóng hàn 龙汉” period, named “Zǐguāng fūrén 紫光夫人”. The king was virtuous, and the princess wise and kind. She made a wish to give birth to several good sons for the king to assist the country. One spring, the sun was shining brightly and the flowers were blooming. “Zǐguāng fūrén 紫光夫人” happily played in the imperial garden. When she came to the Golden Lotus Pond, the hot spring water was very pleasant. She took off her clothes and took a bath, soaked in the clean hot spring, and was influenced by the spiritual energy of heaven and earth. 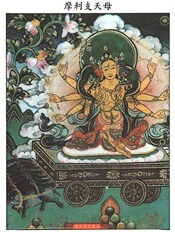 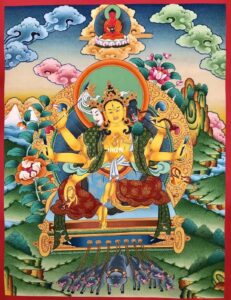 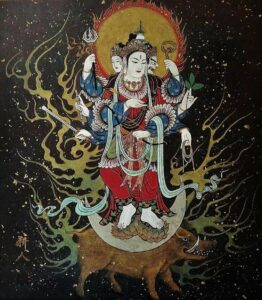 Dou Mu is “Mó lì pū tiān dàshèng 摩利攴天大聖” who was originally a very ancient Indian god, but later absorbed by Buddhism and became “Mó lì pū tiān dàshèng 摩利攴天大聖” or Morizhitian Bodhisattva. In Buddhism, Morizhitian has changed from a male god to a goddess, and from a graceful goddess to a terrifying god with three heads and six arms, pig-faced and fangs. This evolution process is reflected in several main stages of development of Buddhist tantra.  It was  absorbed by Taoism and evolved into the Taoist god Dou Mu worshipped by Taoist believers.

Morizhitian is a bodhisattva that spans the cultures of the two religions, involving the Taoist “Běidǒu北斗” belief, especially the Song Dynasty Taoist scriptures “Běidǒu běn shēng zhēn jīng北斗本生真经” and “Dòu mǔ xīnjīng 斗姆心经”. Dou Mu is describe as a native of “Tiānzhú 天竺”, who had merged with Morizhitian. Dou Mu has the names of ““Zǐguāng tiānmǔ 紫光天母”, “Yèguāng jīn jīng 夜光金精”、“Dà yuánmǎn yuèguāng wáng 大圆满月光王”, etc., which is exactly the same as the Sanskrit Marici, meaning  “Mighty Light”,  of Esoteric Buddhism. The current Taoist statue of Dou Mu has changed from the three sides of the original Morizhitian to four sides. There are few Taoist statues with multiple sides. This tradition is also the result of the integration of Buddhism and Taoism. 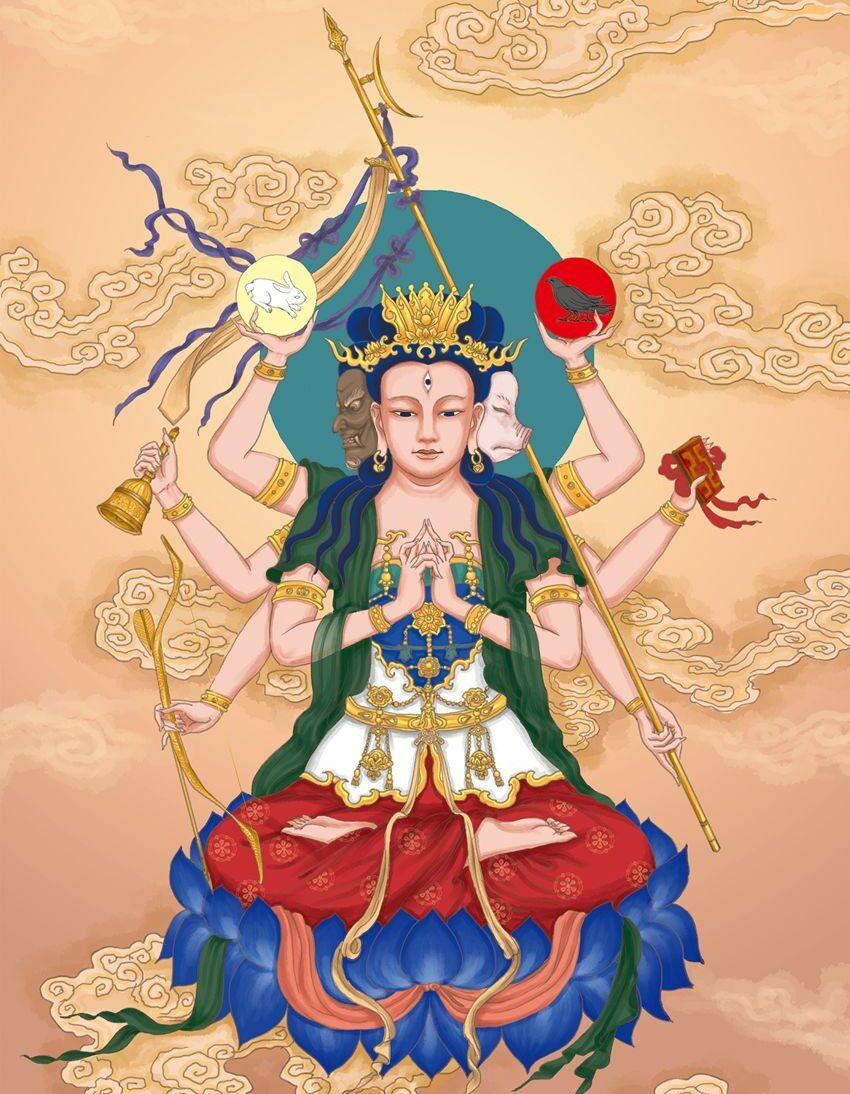 In Taoist temples commonly displayed with three eyes, four heads and eight arms, holding different objects in each hand. Two hand make a handseal, one holds a halberd, one bow, one bell, one seal, one carries the sun and one the moon. It is said that Dou Mu Yuanjun’s honouring day is on the ninth day of the ninth lunar month.

“Tài shàng xuán líng dòu mǔ dà shèng yuán jūn běnmìng yánshēng xīnjīng 太上玄灵斗姆大圣元君本命延生心经” says: Dou Mu uses great medicine (Dà yào 大药) to heal the power, harmonizes the five elements and the two qi, relieves stagnation, eliminates suffering and evil, and helps those who are deficient and deserving. Protects childbirth, treats diseases and scabies, and applies great medicine. Born without the light of many moons, she is the mother of the Big Dipper. Dou is the soul and water is the essence. The body of Jade Pond is gold, transformed into nine buds of wisdom, and it emits infinite light, shining in the bright court. At the time of using the Taiji method, its wisdom gathers strength, forming the sun on the right and the moon on the left. Bright stars in the east, “Chǎng yǔ 长庾” in the west, the six stars for good fortune in the south and the seven officers in the north indicate longevity.

The scripture continue: Dou Mu ascends to the throne, rests his mind, cultivates his soul, dissolves into the Qi, and enters the mystic gate. The purple emptiness flourishes, the fruit provided by the mysterious spirit, the wonderful path emits the infinite subtle light, and the void penetrates the golden flower. The nine buds of the golden lotus are transformed. 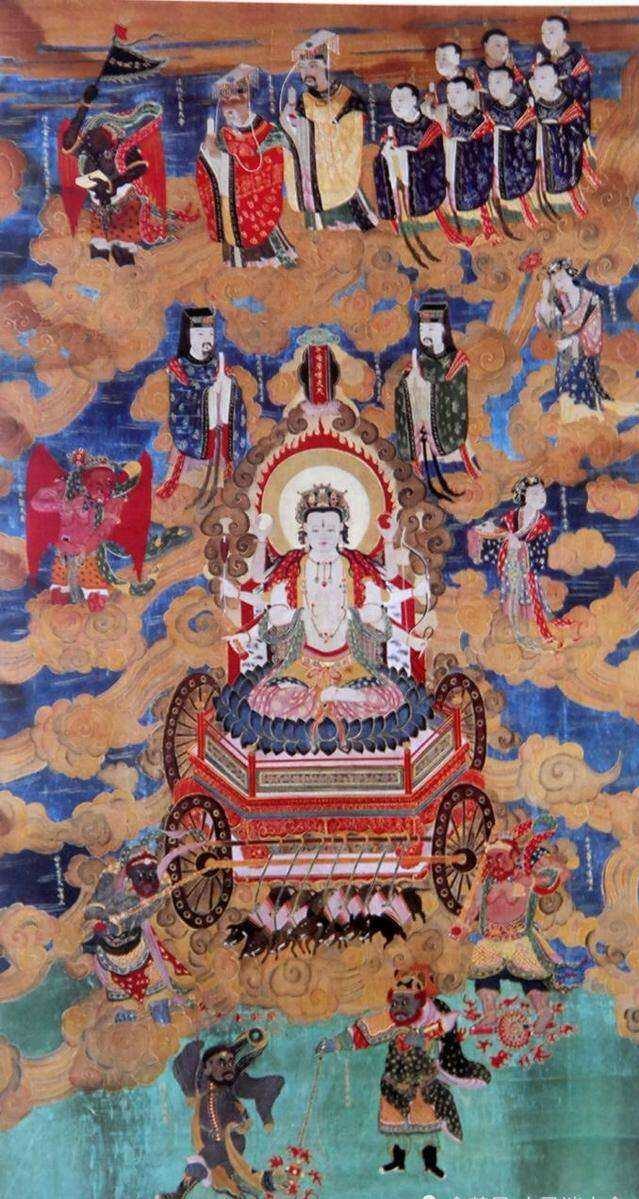 Chanting the incantations with a specific method will cultivate a connection to Dou Mu and the great medicine.

When Patriarch Lü Dong Bin performed this incantation, Dou Mu’s image appeared  with four heads and eight arms, wearing a celestial brocade robe, and a golden tower on the top of the head, with a total of nine floors. There were two hands making a hand-seal, and six hands next to it: one hand holds the sun, the other holds the moon, another holds a halberd. On the flag, there is a golden inscription: “The Great Emperor of the Nine Heavens Thunder God”,  holding a bell in one hand, a bow in the other hand, and holy seal in the other.

When “Sòng gāo zōng 宋高宗” was trapped by the “Jīn 金” soldiers, he heard the sound of chariots in the air, and he looked up to see Doumu Yuanjun, who was riding a chariot of seven hogs with four heads and eight arms.

Patriarch “Wáng cháng yuè王常月”, ordained and became a cultivating Taoist in Mount “Huà shān 华山”, where he was taught the “”Běidǒu jīng 北斗经” and “Běi dǒu zhòu 北斗咒”. Since then, he has been meditating during the day, reciting scriptures and mantras at night, worshipping Beidou, and contemplating. 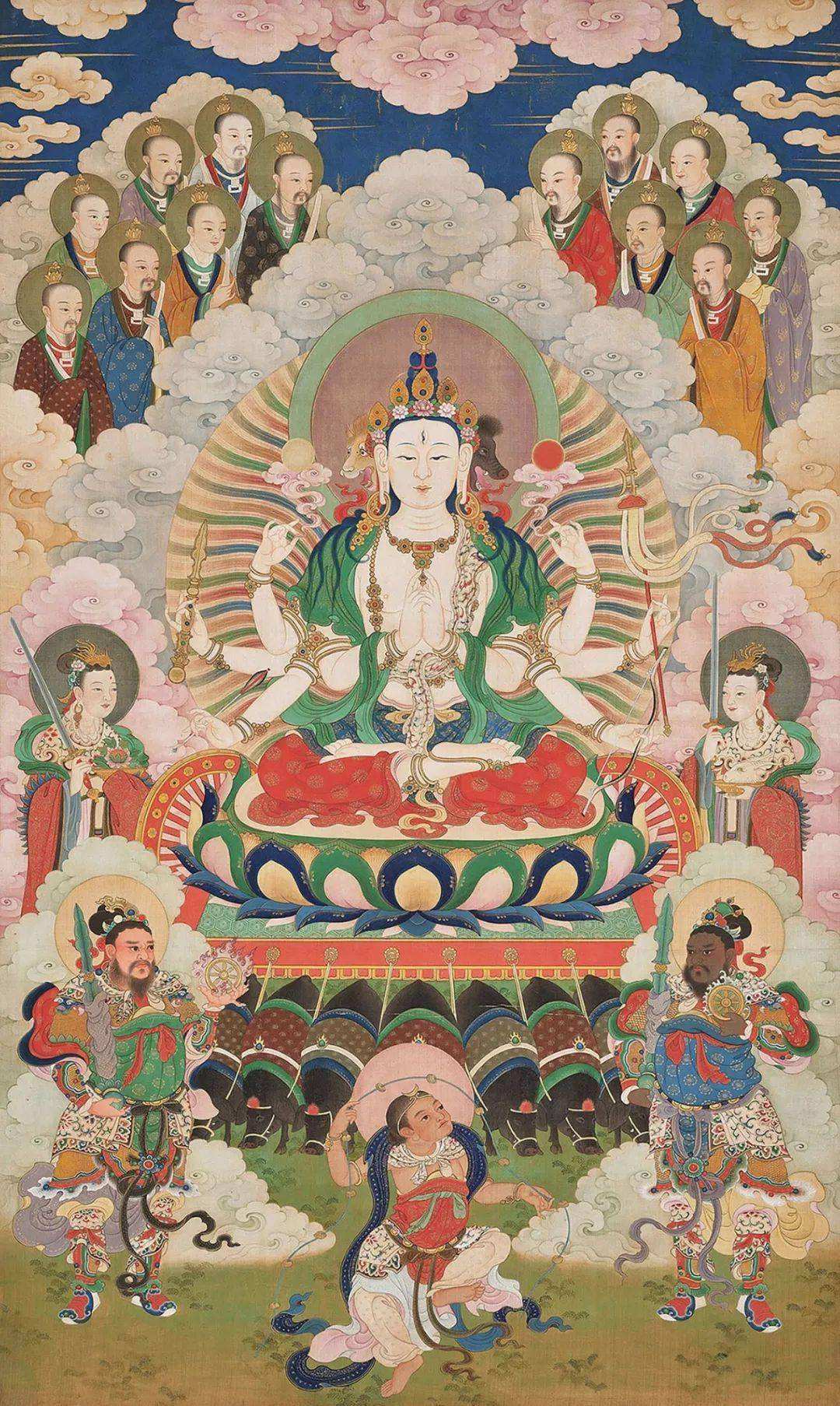 Dou Mu rides a chariot dragged by seven hogs in front. These “seven hogs” are the incarnation of the seven stars of the Big Dipper. The use of seven hogs to replace seven stars is related to the ” Yīxíng dàshī 一行大师” of Buddhism. According to the records of  High Monks in the Song Dynasty , a group of ancient astronomers in China translated many of the scriptures related to the stars in Buddhist scriptures and esoteric teachings, such as “Sù yào yí guǐ 宿曜仪轨、Qī yào xīngchén bié xíng fǎ七曜星辰别行法、Běidǒu qīxīng hù mó fǎ 北斗七星护摩法” etc.
The biography of “Sòng gāosēng 宋高僧” talks about his ability to hide the seven stars. According to the story, his family was poor when they were young they were often helped by the elderly neighbors. To repay the old woman’s kindness, when her son was about to be executed for murder, Song immediately used a technique to hide the seven hogs in a giant urn, so that the seven stars in the sky disappeared, and “Xuánzōng 玄宗” amnesty the world. At the end, the old woman’s son was saved from death. There are many books in history that record the story of Dou Mu and people also use seven hogs to represent seven stars.