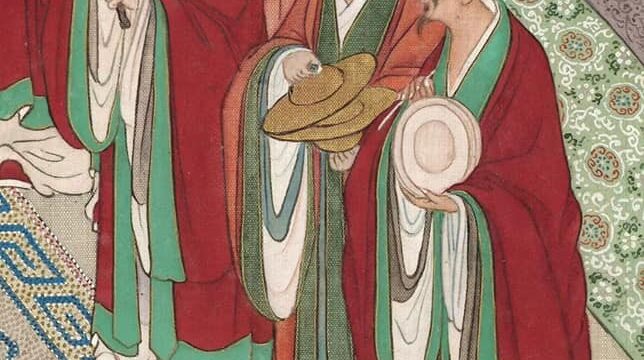 During the ceremonies the priest is accompanied by a group of Daoist musicians called the Jīng Shī 经師 or Jīng Tuán 经团. Ritual music is essential to Daoist ceremonies. 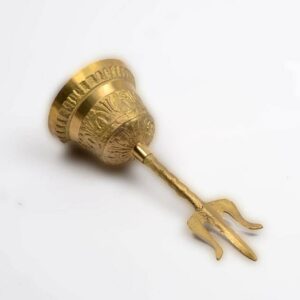 The hand-bell is also called Dì Zhōng 帝钟、Fǎ Zhōng 法钟、Fǎ Líng 法铃.
It is generally made of copper, with a handle, and a tongue inside the bell, which makes a sound when shaken. The upper part of the handle is shaped like the character for mountain (Shān 山) , which symbolizes the highest deities, the Three Clearities (Sān Qīng 三清), believed in Daoism. Daoism believes that the bells have the function of calling deities and eliminating demons. When using it during the ceremony, you must hold it with one hand and shake it rhythmically to one side. 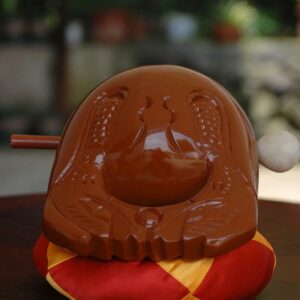 The wood-fish , also known as wooden drum (Mù Gǔ 木鼓) , commonly known as fish (Yú Zǐ 鱼子). The shape is round and carved into a fish shape, hence the name Mù Yú 木鱼. The middle is hollowed out, so the sound is made when hit. It is usually placed on the right hand side of the scriptures and knocked on with a wodden hammer with the right hand. When reciting the scriptures, it is used in conjunction with the rhyme. Every word of the scriptures should fall on the hit of the wooden fish. The book “Supreme Secret Essentials” states: “The wooden fish clears the rocks and awakens the world.” 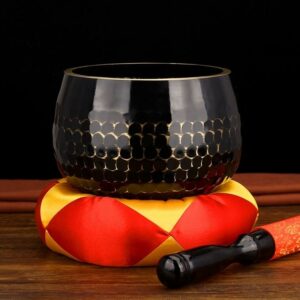 The chime or singing bowl.  There are two types. One is called round chime, the other is round and hollow. They are made of copper or iron and usually placed on the left hand side of the scripture. The main function of the chime is to inform the gods, but it can also eliminate disasters. Usually when Daoists or pilgrims enter the temple hall to worship, the hall master strikes the chime when he raises his head and stands up from bowing. When chanting or during the ritual, the chime must be hit. 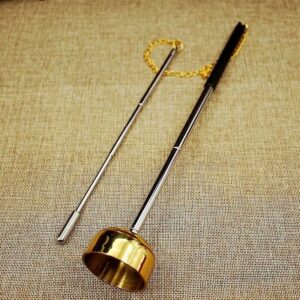 Is called leading bell. Also known as Shǒu Qìng 手磬 (hand chime). The shape is as small as a bowl, made of copper, with a raised top at the bottom of the vessel, and a wooden handle for portable holding. The wooden handle has a rope and is connected to an iron or copper rod. When Daoists worship at the altar or turn to the deities, they hold and call them to guide the Daoists, hence the name leading bell. 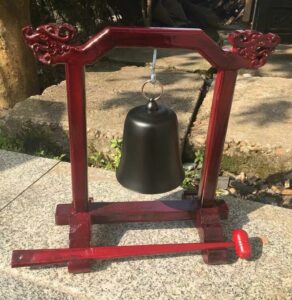 The bell is enerally cast from copper or iron. There is no tongue in the bell, and it makes a sound when hit. There is a difference between a big bell and a small bell; the big bell is used in the morning and evening when the Daoist temple opens or closes. It is used together with the big drum and a board;  the small bell is used during the ceremony as a ritual tool in conjunction with the drum. 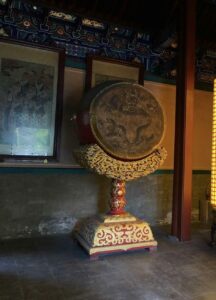 It is barrel-shaped or oblate drum, with bulging sides, hollow, and leather on both sides or only one side. There are big and small drums. The big drum is used in the morning and evening when the Daoist temple opens and closes, and it is used with the big bell and the board; the small drum is used as an instrument during ceremonies together with the small bell. The sound of the drum has the effect of energizing the spirit and warding off evil spirits. Daoism is very particular about drumming, can play the analog sound of storms and thunderstorms, and can cooperate with the classic rhymes, which is called the flower point. 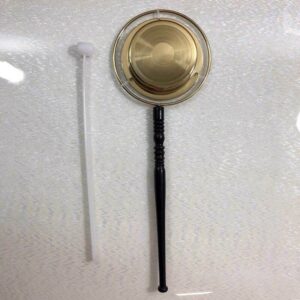 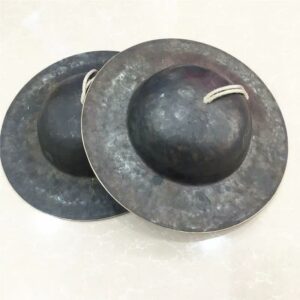 The cybals also known as Tóng Pán 铜盘. Generally made of copper. The shape is a round swelling in the center, with red cloth strips tied to the swelling part. There are big and small differences: the big one is called the Náo Bó 铙钹 (cymbal), Nào Bó 闹钹 (noisy cymbal) or Dà Bó 大钹 (big cymbal). The small one is called the Chǎ 镲 or Chǎ Zi 镲子. When hitting, hold a piece of cloth in each hand and strike both cymbals together to make a sound. Some put one piece on a circular concave cloth pad and use the other piece to hit. During ceremonies it is usually used in conjunction with the Dāng 铛.