Origin of the Big Dipper

斗姆天尊 Dou Mu Tian Zun is a female Divine and is the Mother of the deities who are in charge of the Big Dipper constellation. The word “Dou” means the Big Dipper and the word “Mu” means mother. She is also the mother of the “Zi Wei Emperor” and the “Great Tian Huang Emperor” of the Heaven. 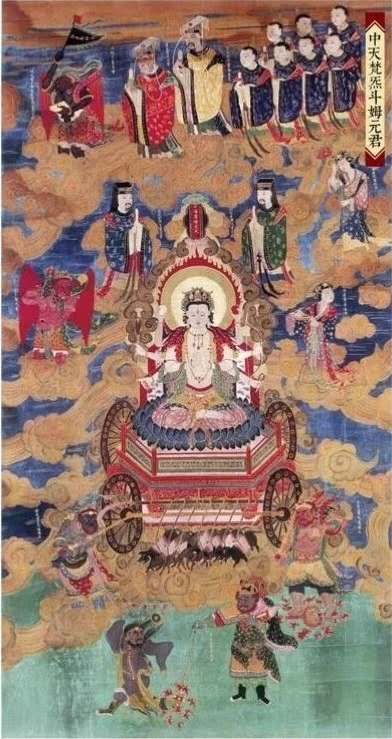 She is often shown with three different faces. Besides her human appearence she has a face shaped like a pig and another one shaped like a demon. This symbolizes the ability to watch over three realms. She is sitting in a lotus flower carriage pulled by 9 hogs. She has 8 arms carrying the sun, the moon, a bell, a seal, bow and arrow and a hellebard. The remaining two hands form the Dou Mu Handseal.

According to the Fundamental Destiny Life-Prolonging Heart Scripture of the Great Sagely Primordial Sovereign of the Supreme, Mysterious and Numinous Big Dipper ( 《太上玄靈斗姆大聖元君本命延生心經》 Taishang Xuanling doumu dasheng Yuanjun Benming Yansheng Xinjing ), the Big Dipper, “with her great merit of medicine and healing, manages and harmonizes the five agents, balances the Vital Breaths ( 氣 Qi ) of Yin and Yang, dissolves the stagnant and eliminates the evil and dark. Under her mercy, those who miss the time of salvation catch up with the time of salvation.

In charge of the safety of pregnancy and birth, as well as the healing of diseases, she takes the important role of Heavenly Healer ( 天醫 Tianyi ) “. “Seated on her precious throne, the Big Dipper peacefully cultivates divine perfection, refines celestial and terrestrial spirits, concentrates Vital Breath with an empty mind, and enters the Mystery of Mysteries. Breathing the numinous wind, gathering the purple void energy, she has attained the mysterious and numinous Sublime Dao, and releases infinite subtle rays penetrating the Pool of Essence ( 華池 Huachi ). Nine golden lotuses, as incarnations of the rays, give out greater and greater light after seven days in the pood. The light rises to the Nine-Essence Heavens ( 九華天 Jiuhuatian ) and transforms into the Nine Great Treasure Pavilions.”

In the pavilions, the Nine Perfect Vital Breaths concentrate and manifest themselves as the Nine Emperors of the Dao Body: the first is the Heavenly Emperor ( 天皇 Tianhuang ), the second is Purple Subtlety ( 紫微 Ziwei ), the third is the Lusty Wolf ( 貪狼 Tanlang ), the fourth is the Giant Gate ( 巨門 Jumen ), the fifth is the Store of Wealth ( 祿存 Lucun ), the sixth is the Civil Chief ( 文曲 Wenqu ), the seventh is the Pure and Chaste ( 廉貞 Lianzhen ), the eighth is the Military Chief ( 武曲 Wuqu ), the ninth is the Troop Destroyer ( 破軍 Pojun ). 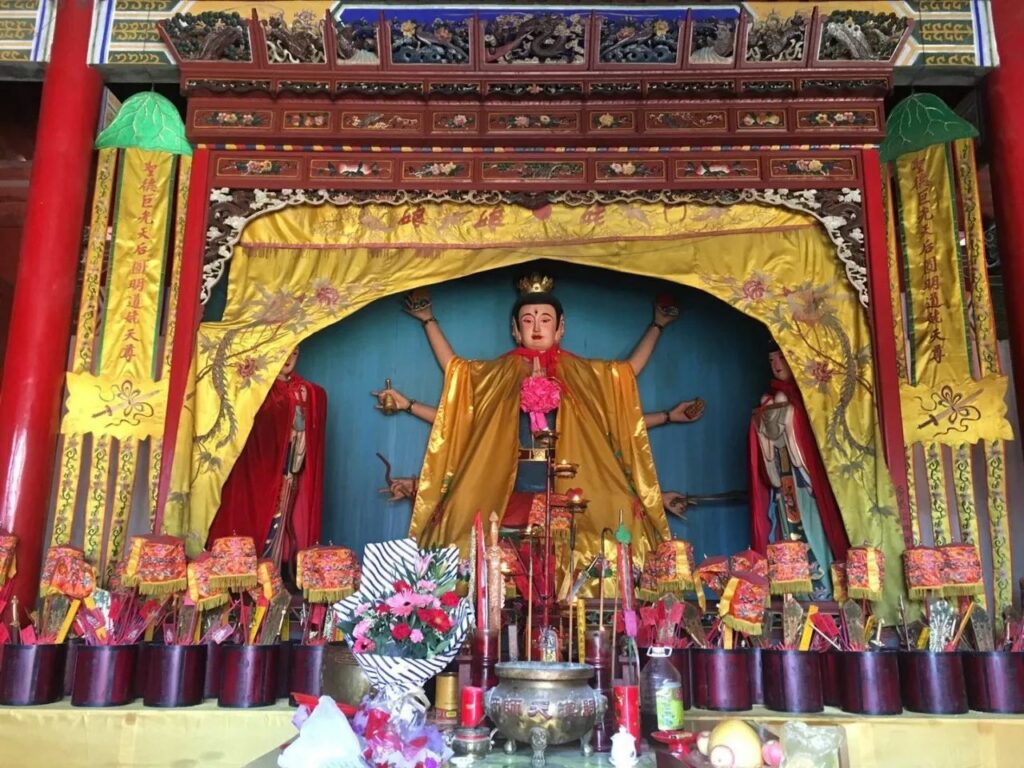 There are Big Dipper Halls in most major Daoist temples. The Divine image always appears as a female spirit with three eyes, four heads and eight arms. The holy birthday of the Big Dipper is the 20th of the sixth lunar month, or the 9th of the ninth lunar month. On that day, Daoist adepts often hold rituals to pray for longevity and for giving birth to sons.