The Story of the True Warrior 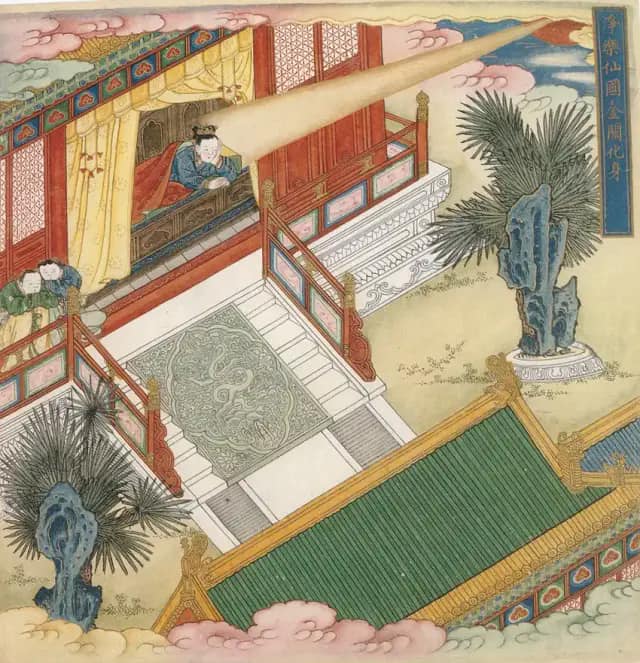 As the son of the king of Jing Le (净 乐), he was born in the heavenly palace of non-desire. The queen dreamed that she had swallowed the sun and was suddenly pregnant after waking up. After 14 months of pregnancy, she gave birth to a wonderful baby. The prince was an exceptionally bright child and learned various Daoist practices early on. He grew up without any material want. In his early twenties, he had a vision in which Tai Shang Lao Jun showed him the misery of the world and advised him to go to Wudang Shan (then still Tai He Shan 太和 山) to cultivate the Dao there. He left his home and his parents and went to Mount Wudang. Tai Shang Lao Jun commissioned an immortal from Wudang to keep an eye on the prince and protect him from danger. Zhen Wu had several encounters along the way; first he gave his horse to a man when he saw that his mother was very sick and urgently needed to see a doctor. Then he helped an old man who owed a quarreling bully a large sum of money, and who instead wanted to take his little granddaughter with him to sell her. The prince did not know the value of the money, so he gave the bully what he had taken from home and that was more than enough to cancel the old man’s debt. Now he had nothing left, except what he was wearing on the body. He continued walking until he reached the area of ​​Wudang Shan.

Meanwhile his mother had set out with only a few entourage to bring him back. When she almost reached him he barely managed to escape on difficult terrain and winding paths. She called after him and the echo could be heard from far away. Today, therefore, these paths are called “The 18 winding paths of the calls of the mother” in Wudang. When she noticed that he was not coming back, she cried incessantly, and a small fountain was created, which is now called the “fountain of mother’s tears”. Undeterred, Zhen Wu wandered on. On a path he met an old Taoist who was meditating and who, after asking a few testing questions, accepted him as a student and instructed him in various practices. His master was Yuan Shi Tian Zun 元始 天尊. Zhen Wu exercised zealously and exercised hard day in and day out, often finding secluded places to meditate in peace. After a while, however, he felt that he wasn’t making any progress in his practice and he got homesick. Then he made the final decision to leave Wudang and return home.

On the way down he met an old woman who was sharpening a thick iron rod on a stone. Zhen Wu asked what she was doing, and the old woman replied, “I’m grinding this iron rod into a needle. My daughter is supposed to get married soon and I want to sew a beautiful wedding dress for her. For that I need a good needle ”. Zhen Wu said: “A needle doesn’t cost much, why do you do so much work with this iron bar, it will take forever to make a needle out of it”. The woman replied: “It may take several years, but if I keep grinding and grinding, I will surely get a particularly good needle”. When he heard these words, it hit him like lightning. He thanked the old woman and made his way back up the mountain, because he now understood that he had to practice constantly, to one day overcome oneself and become immortal. It was Tai Shang Lao Jun who brought Zhen Wu back on the right path in the form of the old woman.

After many years of cultivation, he became closely related to his environment. Various animals accompanied him on his tours through nature. When he sat in silence for days, tigers, bears, and wolves watched over him; when he was hungry, monkeys, squirrels, deer and other animals brought him fruits, nuts and vegetables. Then he slurps the mist and drinks the dew.

Zhen Wu had become an extraordinary fighter and mastered a special sword technique. One day when an army approached, which was to bring him back on the orders of his mother, he took his sword and split a mountain with one blow and a deep ravine was created between him and the army. The soldiers were powerless and returned without the prince. Zhen Wu went back into solitude and continued his practice.

Often he ate nothing for weeks, even months, did not sleep and did not move a bit. Persisting in deep meditation, he even accepts that birds built a nest on his head out of his disheveled hair. He wanted to finally get rid of food and thus of habits. One day, by a river, he met a pregnant woman who was about to give birth. The woman was Guan Yin, who pretended to be pregnant. Zhen Wu helped her and when she gave birth, he cleaned everything of the blood and afterbirth in the river. Suddenly four signs appeared in the water: 玄天 上帝 Xuan Tian Shang Di. He realized that he had to free himself from his past deeds and cleanse himself and cut his stomach and intestines out of his body in order to cleanse them as well and thus cut himself off from past vices to free. The water of the river turned completely black and shortly afterwards completely clear and pure again. When he did this, Guan Yin was so touched that he immediately healed him. 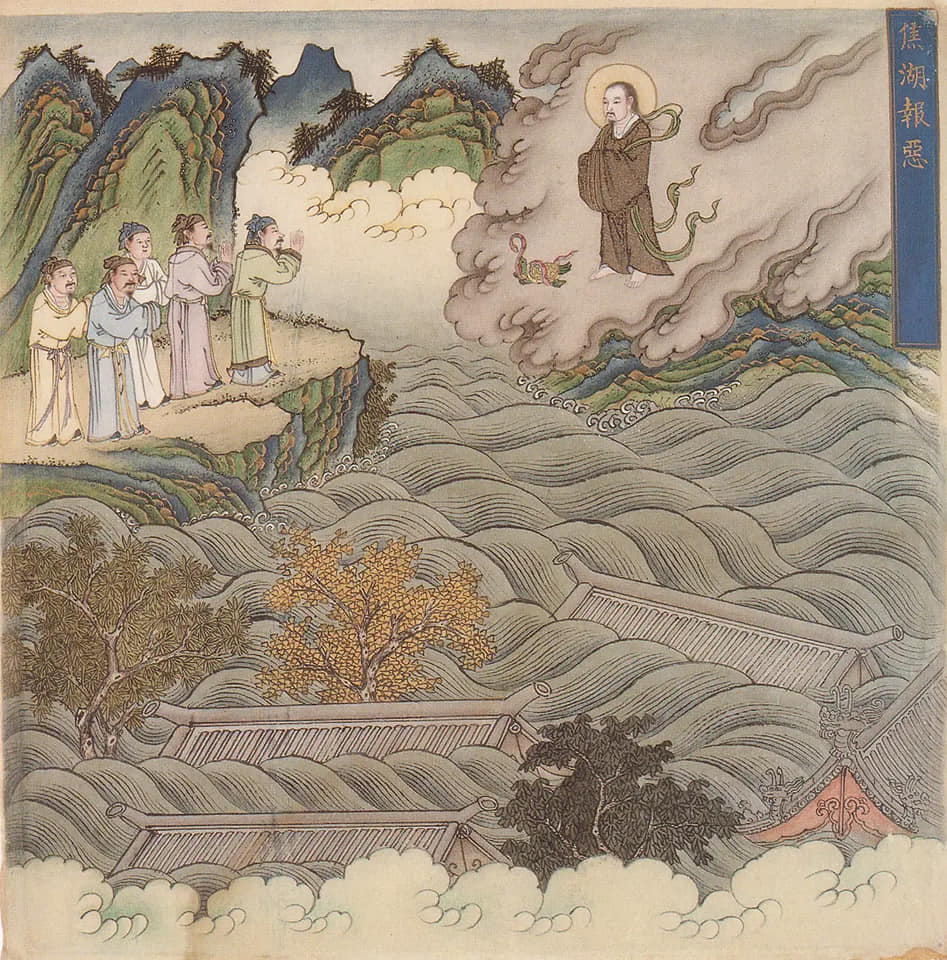 His intestines absorbed the earth’s energy and became a giant snake and turtle, which tried to cause harm. Zhen Wu tamed them, and from now on they followed him everywhere. He could even travel on them and they obeyed his command. In human form, as General Wan Gong and Wan Ma, they took care of the needs of the people who lived around the Wudang Shan. Before Zhen Wu settled in Wudang, the area was very wild and dangerous. He is assigned to the element fire and Zhen Wu to the water. According to Taoist teaching: If the water is below and fire is above, there is chaos and disorder; if fire is below and water is above, fire heats the water and steam rises. In a figurative sense, this means that the invigorating spirit can rise.

Zhen Wu was practicing on Wudang Shan for 42 years when one day a young girl came up to him and made him look beautiful. He didn’t let himself be influenced and was still polite to her. She offered to marry him and threw herself on his neck, then he pushed her back and said that he could never marry her because he cultivated the Dao and didn’t have time for it. She burst into tears and shouted that she can’t go back home, and if he doesn’t take her then she would have no more sense of living. When she said this, she jumped off a cliff. Zhen Wu saw the consequences of what he had done and selflessly jumped after her to save her. The girl was none other than her master, who was testing him for the very last time. She transformed, and along with five dragons, Zhen Wu rose to heaven and became immortal. 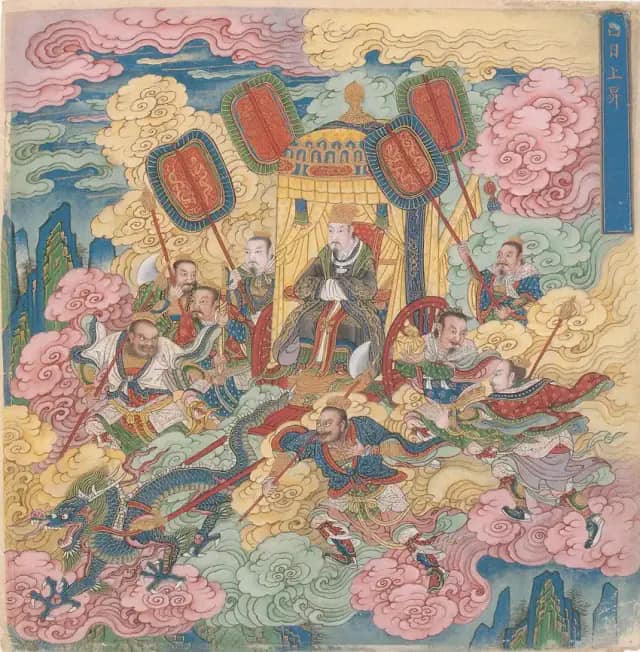 Legend has it that Zhen Wu once borrowed the sword from Lü Dong Bin to fight a demon. After defeating the demon with the magical sword, he didn’t want to give it back. Since the sword would fly back to its rightful owner on its own, Zhen Wu had to hold onto it constantly.

In the tenth year of the Yong Le Era, Zhu Di, the prince of Yan, wanted to disembark his nephew and become emperor himself. Its capital was Bei Ping (now Beijing), in the north of the country, and so it made sense to start a campaign with the support of the god of the north, Xuan Wu Da Di. Zhu Di commissioned Marquis Zhang Xin to build a complex of Build temples on Mount Wudang. 200,000 soldiers helped with this project and promoted the worship of the Great True Warrior on the highest peak.

The immortal protection mantra “You Sheng Zhou” (佑 圣 咒) calls out the true warrior of the “essence of water”, which is the transformation of the highest yin. Omnipresent in all directions, its power terrifies all spirits. Because of belonging to water, the True Warrior rules over rivers and fires, preventing relevant catastrophes. For this reason, many temples were built in the palaces of the Ming Dynasty in honor of the god Zhen Wu.

The 3rd day of the 3rd month according to the lunar calendar is the divine birthday of the True Warriors. On this day, festivities and offerings take place everywhere.