Quan-Zhen Northern Lineage Daoism considers the Bei Wu Zu 北五祖 as the founders and patriarchs of the lineage.

“Shao-Yang Di-Jun”  少阳帝君 is first of the Wu Zu (the Five Patriarchs). His name was Wang Chen, also called Wang Xuan Pu. He lived around the 4th to 5th century before his enlightenment. Wang Chen is said to be a direct student of Laozi. His title “Shao-Yang Di-Jun” was conferred by an Emperor of the Yuan Dynasty in year 1269.  Wang Xuanpu, having learned the essence of Baiyun Shangzhen’s teaching, practiced it for three years and became an expert of it. Then he carried his sword and set out to do justice in the world. While practicing poetical justice, he would gather and wield the Vital Breath ( 氣 Qi ) of the Supreme Ultimate ( 太極 Taiji ). After he finished annihilating evil people, his two swords would fly up into the sky and then fly back to him.

According to the Records of the Orthodox Sect of the Golden Lotus ( 金蓮正宗記 Jinlian Zhengzong Ji ), Wang Xuanpu learned from Baiyun Shangzhen the Black Talisman ( 青符 Qingfu ) and Jade Seal ( 玉篆 Yuzhuan ), the Golden Rules and Numinous Writs ( 金科靈文 Jinke Lingwen ), the Secret Formula for the Great Elixir ( 大丹秘訣 Dadan Mijue ), the Fire Phases of the Cosmic Orbit ( 周天火候 Zhoutian Huohou ) and the Black Dragon Swordplay ( 青龍劍法 Qinglong Jianfa ). When he was at the Ningyang Grotto of Mt Zhongnan, he imparted the Perfect Formula for Longevity ( 長生真訣 Changsheng Zhenjue ), the Fire Phases for Refining Golden Elixirs ( 金丹火候 Jindan Huohou ) and the Black Dragon Swordplay to Zhongli Quan. The Golden Elixir sect of Zhong and Lu ( 鍾呂金丹法 Zhonglu Jindan Pai ) (Zhongli Quan and Lu Dongbin) was later formed on the basis of the above-mentioned knowledge. 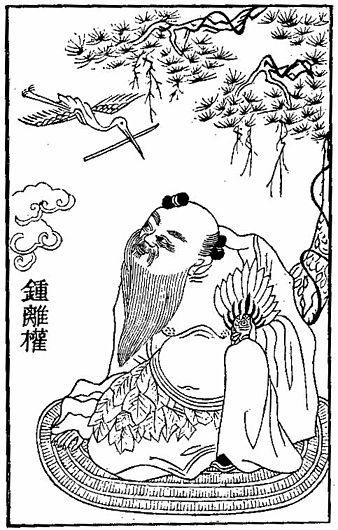 Who is Grand Master Zheng-Yang?

Grand Master Zheng-Yang had created many basic concepts in Taoist Internal Alchemy, such as “Internal Herbs”, “Huo Hou” or “the control of fire”, “Collecting” of the internal herbs and etc.

It was recorded that Zhongli Quan learned from Imperial Sovereign Donghua the Red Talisman and Jade Seal ( 赤符 Chifu ), the Golden Rules and Numinous Writs ( 金科靈文 Jinke Lingwen ), the Secret Formula for the Great Elixir ( 大丹秘訣 Dadan Mijue ), the Fire Phases of the Cosmic Orbit ( 周天火候 Zhoutian Huohou ) and the Black Dragon Swordplay ( 青龍劍法 Qinglong Jianfa ). A little later he met the Perfect Man of Huayang and learned from him the Jade Knife of Supreme Oneness ( 太乙刀圭 Taiyi Daogui ) and the Golden Elixir of the Fire Talisman ( 火符金丹 Huofu Jindan ), thus achieving a profound understanding of the ways in which the mysterious Dao works. No sooner had he found the Secret Formula of the Jade Box ( 玉匣秘訣 Yuxia Mijue ) hidden by the Yellow Emperor in a grotto in Mt Kongdong than he became a real Immortal. One day when he was travelling in the Lü Mountains, he came upon Lu Dongbin to whom he imparted the Swordplay of the Heavenly Concealment of the Great Dao ( 大道天遁 Dadao Tiandun ) and the Secret Formula for Making Elixirs of the Dragon and Tiger. Zhong and Lü later formed the Golden Elixir sect of Zhong and Lu ( 鍾呂金丹派 Zhonglu Jindan Pai ), which exerted a profound influence upon the development of Daoism in the Song and Yuan dynasties. 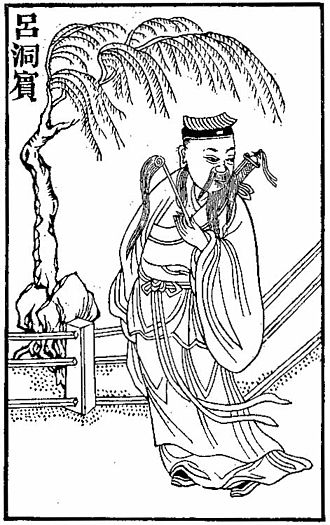 Who is Grand Master Chun-Yang?

Grand Master Chun-Yang was born on April the 14th in year 796. His name was Lu Yan before enlightenment. It is said on the day of birth a white crane flied into the delivery room, soon Lu Yan was born.

Lu Yan had once passed the highest qualification exam for becoming a government official in the year 862. But soon after the exam he met his master Zheng-Yang, and again after went through extensive tests he was accepted as a student and being given full knowledge of immortality and enlightenment.

Grand Master Chun-Yang had made many changes to the theories and practice of Taoism. For example, he emphasised compassion and society serving as the correct way for enlightenment; he had changed Taoism from practising external alchemy (for immortality purposes) to practising internal alchemy; he had also stopped popular swordsmanship in Taoists to the practice of slashing one’s own greed, worry and desire.

These changes are very significant in the development of Taoism. In 1161, he was given a holy title, later in year 1269 and 1310 he was again conferred with holy titles by the Emperors. 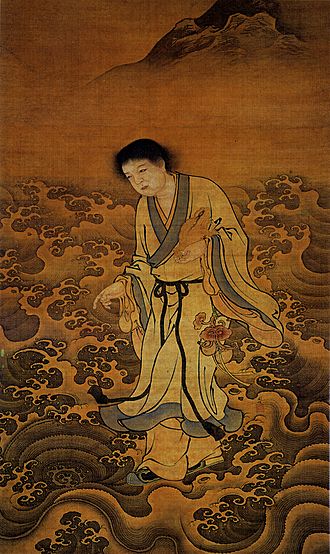 Who is Grand Master Hai-Chan?

Grand Master Hai-Chan is the forth of the Wu-Zu (the Five Patriarchs), his name was Liu Cao and lived around the 10th century before enlightenment.

He had served as the prime minister of a small nation. While he was the prime minister, a man came to visit him one day and asked for ten eggs and ten coins. Then the man piled the eggs one on top of another separated by the coins. Having seen this Liu Cao awed with “How dangerous it is”! The visitor smiled and said “Your position in this world is more risky than this pile”. Soon after the encounter, Liu Cao resigned from his high post and became a disciple of the visitor, Grand Master Zheng-Yang. 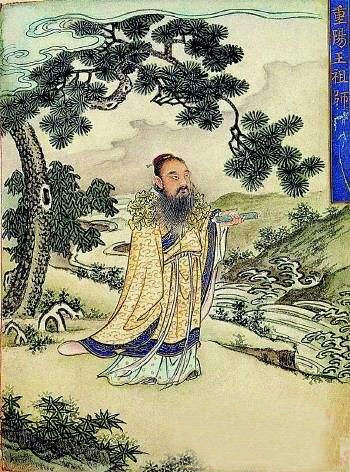 Who is Grand Master Wang Chong-Yang?

When he was 47, Grand Master Chong-Yang met his master Lu Dong Bin. He taught seven very famous students, they are the “North Seven” Taoist Masters. Grand Master Chong Yang is the actual founder of one of the most influential Taoist sects, the Quan-Zhen Taoism.