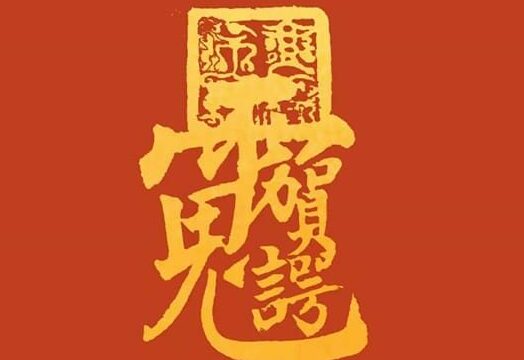 Every year during the chinese Spring Festival, many Daoist believers consider a fortune reading to ensure they don´t offend the Tai Sui 太岁, the grand duke of Jupiter. Tai Sui is also known as Tai Sui Xing Jun (太岁星君) or Sui Jun (岁君). 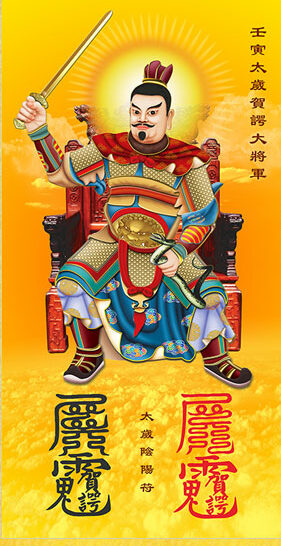 The Tai Sui originated in the chinese astronomy and astrology as a help to calculate the chinese zodiacs. Ancient daoist scholars found out that Jupiter takes about 11.86 years to circle around the sun once. They devided the orbital sphere of Jupiter around the sun into 12 parts as subject to the 12 Earth branches.  A day was also devided into 12 hours (12 times 2 hours).

Since Jupiter passes the 12 sections in a year, the scholars created the 12 astrological signs. Because the Jupiter takes 11,86 years to circle ths sun and not exactly 12 years, there will be a noticeable inaccuracy to calculate the zodiac signs after some years.

Tai Sui was created as an imaginary “Jupiter” to correct the inaccuracy of the 12 divisions and Jupiter’s orbit, so that one circle was exactly 12 years. This made the calculation of the zodiac signs more accurate. Every year on Li-Chun (立春), the beginning of spring, Tai Sui enters a new orbit and the Tai Sui Diety changes. In Chinese culture men created gods and deities, whereas, in the West, it’s the reverse. They often add mysticism to things they can observe but not explain.

The scholars used 10 Heavenly Stems (十天干) and 12 Earthly Branches (十二地支) that combined created the 60 years cycles (六十花甲) which are represented by 60 Tai Sui deities.
First records of Tai Sui were from the Eastern Han Dynasty. Worshiping Tai Sui became more popular over the generations. It was much later that 60 generals were worshipped as Tai Sui´s that assist the Jade Emperor to rule of the human world. Each of the 60 Tai Sui´s  takes turn to be in charge for a year.
Tai Sui´s are under the jurisdiction of Dou Mu 斗姆 , who is in charge of the star deities and therefore often displayed in temple halls together with the Tai Sui´s.

Yin Jiao (殷郊) is in charge of the 60 Tai Sui´s. Since his appearance is quite cruel he was given the image of a little boy holding a banner saying Dang Nian Tai Sui (当年太岁), meaning this years Tai Sui. 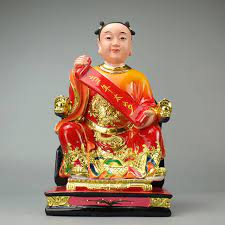 There are 4 types of offences of Tai-Sui:

The effects of “Clashes” are the most severe, followed by “Punishment”, “Harm”, and “Destroy”.

It is commonly known that if Tai Sui crosses ones zodiac year, it will bring bad luck, so people try to find ways to avoid that.

What zodiac is offending Tai Sui the coming year?

In 2022, the year of the Tiger following zodiac signs will offend the Tai Sui -“Fan Tai Sui”  犯太岁:

– Monkey has a clash 沖 and punishment 刑 relation with Tiger

– Snake has punishment 刑 and harm 害 relation with Tiger

– Pig has a destruction 破 relation with Tiger

What should we do or avoid during the coming year?

A change in Tai Sui basically means moving into a new year. Energies have shifted, which also means one’s Ba Zi 八字 chart has changed. At the end of the day, which zodiac ‘offends’ the Grand Duke of the year is simply understanding the Branch interactions in Ba Zi.

Offending the Tai Sui is referring to the zodiac we are born under, which is represented by the year pillar in our Ba Zi charts. The year pillar holds a very important position in one’s astrological chart and is seen as the absolute foundation of our lives and it determines your starting point in life.

People under the Monkey zodiac will likely feel 2022’s effects the most.

The most common remedies to a Fan Tai Sui year would be to pray to the Tai Sui or wear a Tai Sui talisman personalized to them. If one is Fan Tai Sui be prepared for some significant event to happen, especially if you “clash” with the Tai Sui because the effects of “clashes” are the most salient. Something about your environment will definitely change.

What are the Names and Talismans of 60 Tai Sui´s ? 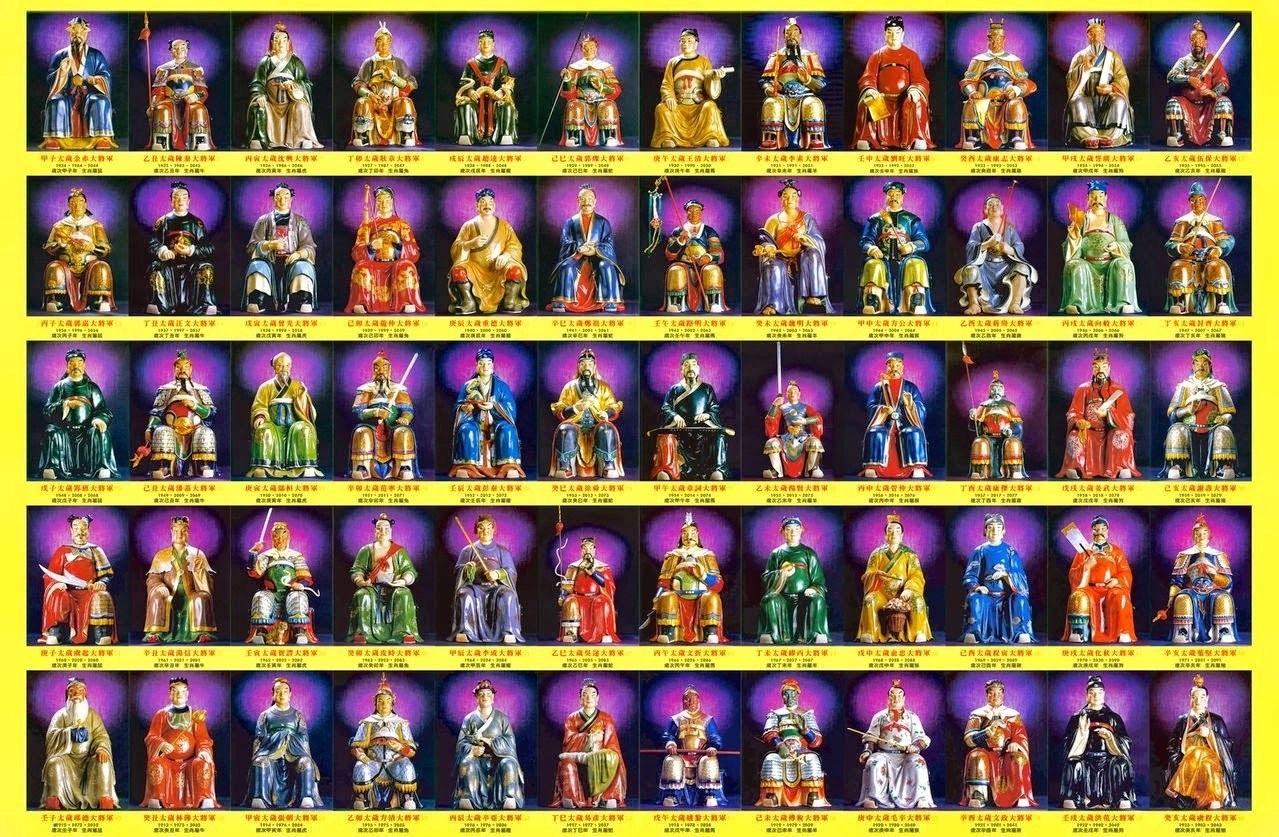 Listed are year and name of the Tai Sui in charge: 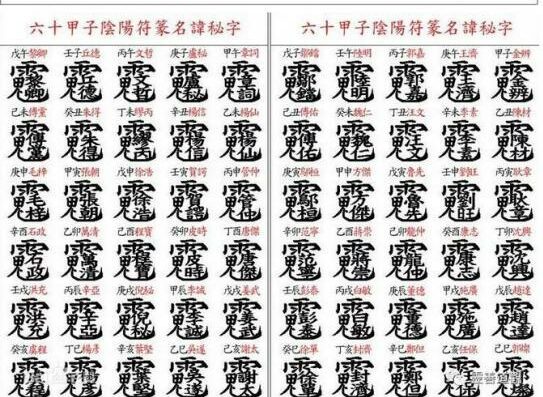 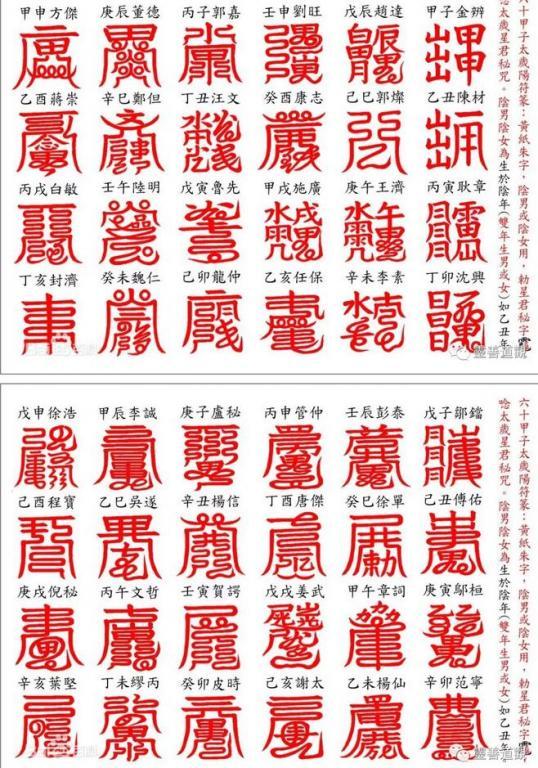 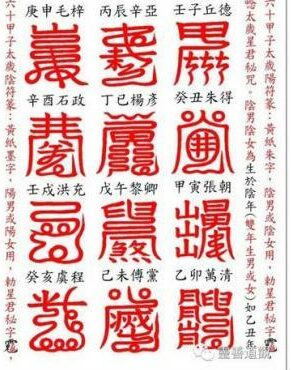